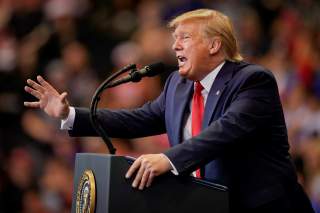 President Donald Trump said Wednesday that he will likely commute the prison sentence of Rod Blagojevich, the former Illinois governor serving a 14-year term on a slew of public corruption charges.

“I am thinking very seriously about commuting his sentence so that he can go home to his family after seven years,” Trump told reporters aboard Air Force One during a flight back from El Paso, Texas.

“I thought he was treated unbelievably unfairly.”

Blagojevich, a Democrat, was arrested in December 2008, mostly on charges that he solicited bribes to fill a U.S. Senate seat vacated by Barack Obama. He was found guilty on 17 counts on June 27, 2011, and sentenced to 14 years in prison. He has been in jail since March 2012.

The Supreme Court declined last year to hear Blagojevich’s appeal of his conviction, meaning he would have remained in prison until 2024.

After his arrest but before his trial, Blagojevich was a contestant on the ninth season of Trump’s reality TV show, “Celebrity Apprentice.”  Trump mentioned Blagojevich’s stint on the show during his remarks Wednesday.

Trump has floated a commutation for Blagojevich before. He said in May 2018 that he was considering pardoning both Blagojevich and Martha Stewart. James Comey prosecuted Stewart in 2003 on securities fraud charges when he served as U.S. attorney in Manhattan.

According to New York Times reporter Maggie Haberman, Trump has revisited the issue after lobbying from his son-in-law, Jared Kushner. Kushner pushed for a full pardon for Blagojevich, but Trump has settled on commuting his sentence instead, according to Haberman. Why Kushner is concerned about Blagojevich’s jail sentence is unclear.

Jesse Jackson has also recently appealed to Trump to pardon Blagojevich, and the disgraced governor’s wife, Patricia, has appeared numerous times on Fox News to appeal for her husband’s release.

“And I watched his wife, on television, saying that the young girl’s father has been in jail for now seven years, and they’ve never seen him outside of an orange uniform,” said Trump.

Trump has handed down several pardons and commutations in his two-plus-years in office. He has pardoned former sheriff Joe Arpaio, conservative pundit Dinesh D’Souza, former Dick Cheney aide Scooter Libby, and others.