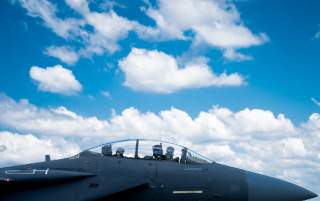 The 2002 Open Skies Treaty (OST) is a confidence- and security-building agreement among 34 nations, including Russia, which allows unarmed aerial observation flights over the entirety of member states’ territory in the interest of military transparency.

But the Trump administration is considering withdrawing from the pact. It asserts that Russia has been violating the OST for quite some time.

For instance, since May 2010, Moscow has restricted OST flights from going within 10-kilometers of Russia’s border with the Georgian regions of South Ossetia and Abkhazia, territories Moscow considers independent from Georgia.

In addition, since 2014, Russia has imposed and enforced a 500-kilometer flight route sub-limit over the highly militarized Russian exclave of Kaliningrad on the Baltic Sea. The OST does not provide for such a restriction.

Other concerns have been raised. Last November, although not being specific about the threat, a senior administration official said that Russia is “misusing the [Open Skies] treaty in their targeting of critical U.S. infrastructure.”

Some members of Congress have also expressed concern about Russian OST flights over the United States.

Another issue is that the U.S. Air Force’s two Open Skies aircraft, the OC-135, are decades old and need to be replaced. The onboard sensor suite also needs upgrading. Such an undertaking could cost more than $200 million.

Despite this, the treaty has supporters in Congress and among our NATO allies and partners. They appreciate the agreement for providing openness and cooperative interaction with Russia in a period of heightened tensions with Moscow.

American allies and partners also value U.S. participation in the OST for other reasons, including maintaining strong transatlantic ties and as a symbol of the U.S. commitment to peace and security in Europe during a period of Russian belligerence and aggression.

A recent example includes an “extraordinary observation flight” over Ukraine in December 2018 by an American OST mission in the aftermath of the unprovoked attack on Ukrainian naval vessels in the Kerch Strait.

Moreover, there is also the speed and ease with which OST imagery can be shared with other OST members, especially with NATO allies, and the general public—which can be important to its understanding of international events.

In contrast, the release of highly classified U.S. military satellite information to U.S. allies and partners—much less the public—is a significant, potentially lengthy process   for a number of reasons, including protecting sensitive U.S. intelligence sources and methods.

Another factor is that most U.S. allies and partners that are OST members lack military satellites. These governments might be forced to rely on commercial satellite sources, which could prove cost-prohibitive for those seeking more than dated, archival material.

Indeed, with a number of security challenges worldwide, there are limits on the availability of U.S. military satellite coverage. In some cases, an OST flight might be the only instrument available to collect on an important security event in short order.

As a collection platform, OST missions are also potentially capable of providing unique or corroborating information on a target of interest, including Russian order of battle, force movements, and military maneuvers (including “snap exercises”).

The idea of aerial observation for military transparency purposes goes back to President Dwight D. Eisenhower, who proposed it to Soviet Union Chairman Nikita Khrushchev in 1955. The Russian rejected the overture as an espionage plot.

Today the United States would certainly be within its rights to withdraw from the OST due to publicly available information on long-standing Russian violations, potential security concerns, and OC-135 replacement costs.

But there are also solid reasons for staying in the treaty, including maintaining transatlantic ties and retaining a unique observation capability of Russian military developments, operations, and doctrine.

The decision to stay or go is unquestionably one of significant importance for American interests as well as those of our allies and partners.

So before a final decision on withdrawing is made, the U.S. government should conduct a thorough review of our involvement—including its costs, risks, and benefits—as well as assess potential means for optimizing U.S., allied, and partner participation in the OST.