Press Ahead: How the U.S. Can Keep Ukraine’s Offensive Alive 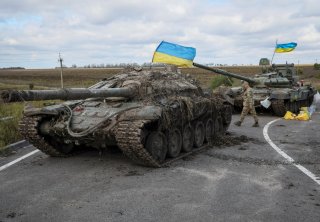 Ukraine’s success in reclaiming territory previously held by Russian forces raises questions about the kinds of equipment, weapons, and supplies they will need to sustain their offensive operations.

The Pentagon and NATO have both been clear that they have a long-term commitment to support Ukraine. To do so, they are now turning to production contracts with private defense companies to build new weapons for Ukraine.

All of this raises questions about how military support for Ukraine may evolve moving forward. They might need more tanks, transport vehicles, force protection equipment, and secure supply lines. Will the United States and its allies send more tanks, armored vehicles, base protection sensors and interceptors, and tactical trucks to move supplies, weapons, and forces forward as the Ukrainians retake territory?

Advancing forces will need forward-positioned food, fuel, weapons, and ammunition available as they maneuver, as well as tents and bedding. This means that the Ukrainians might require forward operating bases from which to launch further offensives into Russian-held territory.

The overall nature of the fight might shift in a way that requires more heavy armor and mechanized forces. While Ukraine clearly has some already, more may be needed to help break through entrenched Russian positions. Ukrainian forces may need to mass and maneuver in different ways than they have so far. This will require force protection tools such as intelligence, surveillance, and reconnaissance (ISR) drones and base protection equipment such as sensors, interceptors, and jammers. Perhaps the U.S. Army’s Counter Rocket Artillery and Mortar (C-RAM), which links sensors to fire control and small interceptor rockets, and area weapons such as a Phalanx gun could be useful for Ukrainian forces.

The United States has already provided Ukrainian forces with small hand-launched drones that can operate in close coordination with mobile ground commanders. Advancing Ukrainian forces will also need a greater degree of command and control to coordinate and de-conflict areas of attack, advancement, and occupation. While they can still rely on the decentralized command approach they have used with great success, there will be a need for greater connectivity during larger maneuvers with more forces. Infantry carriers might have to move Ukrainian units between forward positions using transport and tactical vehicles.

So far, Ukrainian forces have been less vulnerable to Russian attacks thanks to their dismounted, dispersed, and nonlinear formations, as well as decentralized command and control.