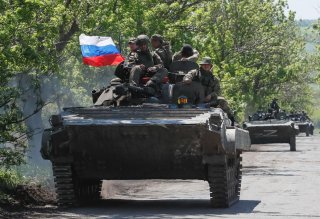 The government of Ukraine announced on Wednesday that it had conducted a prisoner swap with Russian forces, resulting in the release of 144 Ukrainian soldiers—ninety-five of whom had been captured during Ukraine’s defense of the “Azovstal” steelworks complex during the Siege of Mariupol from February until May.

Ukraine’s GUR military intelligence agency announced the swap on its official Telegram channel, observing that most of the prisoners it had recovered suffered from serious injuries—including gunshot and shrapnel wounds, burns, fractured and broken bones, and in some cases amputations—from the combat they had experienced prior to their capture. It appears unlikely that any of the men will be brought back into active service against the Russian invasion.

Although neither the GUR nor the Russian government commented on what Ukraine had given up in return for its soldiers, Denis Pushilin, the president of the breakaway Donetsk People’s Republic (DPR) in Ukraine’s eastern Donbass region, announced that he had secured the release of 144 Russian and DPR soldiers, suggesting that the two sides had made an even trade.

“We handed over to Kyiv the same number of prisoners from Ukrainian armed units, most of whom were wounded,” Pushilin wrote on Telegram.

The precise number of Ukrainian soldiers held captive by Russia and its two allied separatist regions in eastern Ukraine, the self-proclaimed Donetsk and Luhansk People’s Republics,  is unknown, and the Ukrainian government has not released any estimates, although most outside observers have placed the likely number at several hundred.

At the same time, Kyiv has raised concerns about the status of its prisoners, particularly those in the former Azov Battalion, a Ukrainian militia unit infamous for its historic affiliation with neo-Nazi ideology—many members of which were killed or captured in the defense of the Azovstal plant. Although forty-three members of the group were returned as part of the prisoner swap, others are thought to be held by Russia, which has given no indication of whether it intends to honor the Geneva Convention with respect to their treatment.

Although both Russia and its allies and Ukraine have largely adhered to the Geneva Convention throughout the four-month war, units from both sides have been documented violating it. In addition, the Kremlin and the two separatist republics have announced their intent to try captured foreign fighters serving in Ukraine’s International Legion or its armed forces as mercenaries, who are banned from use in armed conflicts under the Geneva Convention and lack its protections. Earlier in June, two British foreign fighters and one Moroccan-Ukrainian were sentenced to death by a court in Donetsk for mercenary activity. Russia has warned that two Americans captured at the same time could face a similar penalty.