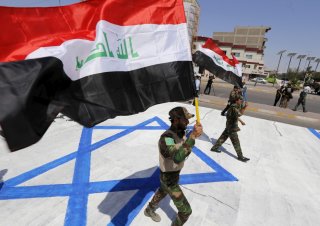 Haidar al-Mullah, a former member of parliament running for election in Iraq on October 10, was disqualified after a leaked audio recording revealed a private conversation in which he said that “in the past, we used to wish that [the late Israeli Prime Minister Ariel] Sharon would rule us rather than [former Iraqi dictator] Saddam [Hussein], and today we say normalization with Israel rather than those pimps [currently ruling us].”

Citing Article 14 of the Electoral Campaigns regulation, which prohibits candidates “from including in their electoral campaign ideas that call for instigation to violence, hatred, ethnic, religious, sectarian, tribal or regional disputes,” the Iraqi Election Commission disqualified Mullah—who, ironically, was calling for regional peace, not dispute.

Mullah’s verdict came two weeks after another court had issued arrest warrants against activists who had participated in a conference that called for peace with Israel. Former member of parliament Mithal al-Alusi, the only Iraqi official who has visited Israel after which his two sons were killed, was also served a warrant even though he is in Germany. Alusi was not at the conference, but the warrant was designed to remind others of what happened to him.

Suppressing free speech is now the norm in Iraq like it had always been under Hussein. In fact, lucky activists are the ones who get summoned to court. Unlucky ones, however, suffer violence at the hands of pro-Iran militias, which have gone as far as assassinating outspoken Iraqis.

Mullah’s disqualification has proven something that Iraqis grew up knowing very well: in private, Iraqis have no qualms about peace with Israel. In public, they are often forced to pretend to care about the “Palestinian cause.”

In fact, the calamities that have befallen Iraqis over the past half-century have made them feel jealous of the Palestinians. Hussein attacked Iraqi Kurds with chemical weapons. The Shiites were slightly luckier. Instead of chemicals, Hussein ordered his tanks to drive over the Najaf cemetery, the largest in the world, to flush out rebels. Even the dead were not spared Hussein’s wrath.

Also under Hussein, many people lost their real estate under false pretenses such as eminent domain. As the country’s endless wars took a toll on the economy, Iraqis lost their life savings to inflation.

After Hussein, the pro-Iran militias continued his inhumane policies. Militia thugs stole property by forging deeds, justifying their theft by accusing the owners of having been Hussein’s partisans. The Islamic State takeover and the ensuing war to eject it caused the death and displacement of millions of Iraqis, many of whom still live in one of twenty-eight refugee camps today. Their property was confiscated by Islamic State, then by pro-Iran militias. The Christian minority in the northwest was forced to organize its young men into an armed militia to protect whatever property it had left, including church buildings.

Chemical weapons, assassinations, random violence, loss of property, and displacement can barely describe what Iraqis have suffered over the past half-century. Starting in 2011, Syrians have caught up with Iraqis, also suffering from chemical weapons and ethnic cleansing. Yet both Iraqis and Syrians are expected to ignore their pain and instead feel angry when Israelis and Palestinians hurl rocks at each other or uproot olive trees. That America should look at the unfolding events in Iraq, Syria, and the Palestinian territories and decide that the “central cause” of injustice is Palestine has only increased the sense of injustice among Iraqis and Syrians, making many of them harbor ill feelings toward the “Palestinian cause.”

Compounding such hard feelings is the behavior of many Palestinians and their leaders, who not only expect Iraqi and Syrian solidarity without reciprocation but have even befriended Iraqi and Syrian tyrants.

The late Yasser Arafat stood next to Hussein as both men paraded the Iraqi army that had decimated a fellow Arab country, Kuwait. In 2014, Incumbent Palestinian leader Mahmoud Abbas sent Syrian president Bashar al-Assad a congratulatory note on Assad’s “reelection for a third term.” Earlier this year, Hamas, which rules the Gaza Strip, sent a delegation that praised Assad for his support of “the cause.”

Murals of Hussein decorate Palestinian streets, and when Palestinians worldwide protest any war in Gaza, many of them join rallies wearing shirts with pictures of Hussein.

To top it all, Palestinians expect Iraqis to boycott Israel even as Palestinians in the territories benefit from the stability of the Israeli currency and buy electricity and water from efficient Israeli facilities. Thousands of Palestinians earn a living by working in or trading with Israel, one of the region’s biggest economies.

Iraqis, however, are not supposed to seek the economic opportunity offered by the normalization of relations with Israel. Iraqis are supposed to boycott Israel, support Palestinians, and call on the world to focus on the “Palestinian cause,” all while ignoring their own interests until those of the Palestinians are served.

This is why, in private, Iraqis call for peace with Israel. In public, they are forced to say the opposite. Even Iraqis living abroad fear Palestinian social shaming should they support peace and normalization with the Jewish state.

Most people support peace, but only a few of them are willing to suffer for its sake. Had America been consistent in supporting freedom of expression and democracy in Iraq, then many of the peace supporters would have shown their faces. But in the absence of freedom, people should not expect much.

Hussain Abdul-Hussain is a research fellow at the Foundation for the Defense of Democracies, a nonpartisan research institute focused on national security and foreign policy. He Tweets @hahussain.