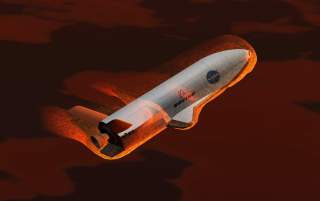 A Chinese company claimed it’s working on a reusable spaceplane similar to the U.S. Air Force’s secretive X-37B. Unlike the X-37B, which launches into orbit atop a Falcon rocket, the Chinese vehicle would blast off in mid-flight from under the wing of a large “mothership” aircraft.

It’s unclear how far along the Chinese design is, when it might fly for the first time and whether the Chinese government has committed to acquiring the vehicle. Nor is it clear exactly why Beijing would want an X-37B-style spaceplane.

Some observers have speculated that the X-37B could be a weapon-in-disguise that’s capable of intercepting and tampering with enemy satellites. If that were true, a Chinese spaceplane might also represent a military threat. But in fact, the X-37B is almost certainly a test vehicle whose main mission is hosting small science experiments. Were it to become a reality, Beijing’s own version of the X-37B would probably undertake similar missions.

Chinese state television reported on the spaceplane concept on March 7, 2018. An animation accompanying the report depicts a sleek, twin-engine mothership carrying the spaceplane to high altitude. The spaceplane’s single rocket engine boosts the vehicle to low orbit, where it opens dorsal bay doors and deploys a small satellite. The spaceplane returns to Earth and lands like an airplane.

A graphic on the news report indicated the spaceplane would be orbit-ready in 2030.

The new vehicle, reportedly under development by state-owned China Aerospace and Industry Corporation, is actually the second major spaceplane concept to appear in China in recent years. In 2008, a robotic vehicle similar in shape and size to the 29-feet-long X-37B was photographed under the wing of a Chinese bomber.

Eight years after the X-37B began its first operational mission in 2010, the merits of a reusable space plane are still subject to intensive debate. The X-37B is essentially a small, reusable satellite with a shorter per-mission endurance compared to single-use satellites. Where many satellites can function for up to a decade in orbit, the X-37B’s longest mission as of early 2018 was its fourth, beginning in May 2015. It lasted 717 days.

The U.S. Air Force insists the X-37B is strictly a technology host for small experiments. The 5-ton X-37B is “a reusable and more effective way to test technology in space and return it for examination,” Richard McKinney, then the deputy undersecretary of the Air Force for space programs, said in 2011. The X-37B’s cost is classified, but almost certainly totals billions of dollars for development and operations through 2018.

The U.S. vehicle’s limitations back up the Air Force’s assertions with regard to its purpose. For military missions, the X-37B is actually at a disadvantage compared to disposable spacecraft. “Building this return capability into the space plane adds tons of extra mass compared to maneuvering spacecraft that are not designed to return to Earth,” Laura Grego and David Wright, from the nonprofit Union of Concerned Scientists, explained in a blog post. “That large mass penalty makes it more difficult and expensive to get a spaceplane and its payload into orbit and reduces the amount of maneuvering that it can do with a given amount of fuel.”

China’s own spaceplane, should it ever become operational, would suffer the same disadvantages compared to conventional satellites. Moreover, in choosing to launch the spaceplane from a mothership aircraft, instead of atop a rocket, China Aerospace and Industry Corporation assumes the burden of also developing a new, very large aircraft.

While a heavy bomber might be able to launch a small spaceplane on some missions, it’s worth noting that the leading user of mothership aircraft in the United States — billionaire Paul G. Allen’s Stratolaunch company — is developing a brand-new, six-engine aircraft for that purpose. The Stratolaunch plane, which in March 2018 was still undergoing ground testing, will “make access to space more convenient, reliable and routine,” the company promised.

Stratolaunch has been working on its first mothership since at least 2011, and initially projected the plane would cost $300 million. If Beijing hopes to deploy a spaceplane and a new mothership by 2030, it needs to hurry … and be prepared to spend a lot of money.