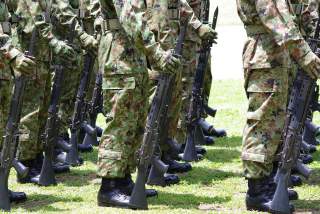 Key point: JSDF's rifle is their standard weapon but it has several issues that a modern rifle shouldn't have.

The standard issue rifle of the average soldier tends to be among the oldest equipment issued by a military. Russian Ground and Airborne Troops use variations of a rifle designed in the 1970s, the U.S. military uses variations of a design from the late 1950s. Japan stands in contrast, using a rifle designed in 1989 (albeit based on an earlier American design from the 1960s). But despite their usage of recent designs, the Japan Self-Defense Forces (JSDF) have fallen behind their Western and even Russian counterparts in updating their rifles to modern standards.

The primary rifle in JSDF service is the Howa Type 89. This rifle is roughly based off and uses the same operating system as the Armalite AR-18, a 5.56mm rifle designed as an alternative to the AR-15 family of rifles. Unlike the AR-15, in which gas travels all the way to the upper receiver to impinge on a piston inside the bolt carrier group, the AR-18 utilizes a short-stroke gas operating system where the gas impinges on a tappet which then pushes the bolt back to cycle the action. Like the AR-18, the Type 89 is made primarily from sheet metal due to its ease of manufacture and cost effectiveness. Despite being a stamped gun—due to strict Japanese export laws and limited demand from the JSDF—the per-unit cost of the Type 89 is rather high. The rifle comes in two variants, the standard Type 89 and the folding stock Type 89F. The rifle was adopted in 1989 following development throughout the 1980s and was a joint development of Toyo Corporation and the Defense Agency. Interestingly, the rifle features three fire modes: semi-automatic, three-round burst and fully automatic.

The Type 89 has some minor ergonomic problems. The rifle is hard to reload rapidly since the stamped steel construction of the magazine well doesn’t have a taper like the magazine well lower receiver of an M4 or M16. While shorter than the M16, the Type 89 is still long compared to the carbines that are becoming standard issue in Western militaries. The most glaring issue with the Type 89 is the JSDF’s lack of commitment to a real program to put modern accessories on their rifle. The standard Type 89 only has provisions to mount an optical sight (with an adapter), a brass catcher bag, a bipod and a bayonet.

In contrast, the standard U.S. Army M4 or Marine Corps M4, M16A4, or M27 will have provisions to mount optical sights, lasers, handgrips and lights in a modular manner. The upper receiver of these rifles have a built in rails and don’t require an adapter plate to mount optics. Both the Army and Marine Corps have adopted standardized optical sights. The JSDF has not standardized any sighting system. Sights have been reported from older Aimpoint models, to Trijicon ACOGs, to indigenous Japanese red dots. These sights require an additional adapter plate to be attached to the receiver of the rifle, adding additional weight and height over bore. Recently, Japanese soldiers have been seen with Low-Power Variable Optics (LPVOs) similar to those favored by American competitive shooters and Special Operation Forces. These are indigenous designs that appear to mount directly to the upper receiver without the need for an adapter plate. They appear to be distributed by a company called Operation Training Service (OTS), as they show up in their catalog. Handguard rails for the Type 89 that would allow for easy mounting of lights, lasers, and other components also appear to be distributed or made by OTS, but they appear to be extremely rare in usage.

The lack of a standardized optic and modern rail for the Type 89 limits their usability in a modern environment. Almost every major Western military has fielded a combat optic as a standard on their service rifle since the 2000s, and Japan’s lack of ability to standardize puts them behind the curve. Optics increase accuracy, magnified optics also increase the ability for a soldier to engage at range and identify and spot targets. There appeared to be a standard new rail and stock package along with a bulky optic that was planned to be procured with the Japanese “Future Soldier” program in 2014, but this program has appeared to be axed. On top of that, the reliability of the Type 89 has been reported by some servicemen to be inferior to American service rifles. “Special” units in the JSDF have adopted foreign weapons instead of sticking with the Type 89 as a result of these shortcomings.

The problem is even worse for some of Japan’s other infantry arms. The standard designated marksman rifle, the Howa Type 64 lacks the sight mounting plate found on the Type 89. The solutions to mount sights have proven incredibly janky, albeit creative. Notably, one soldier was found using a Russian ZenitCo B-12 mounting system that was originally designed for AK-type rifles to mount an optical sight on his Type 64. Other mounting systems for the Type 64 mount the sight incredibly high up on the rifle, making it hard to maintain a solid cheek weld, which is considered to be important for long distance shots. The situation for the JSDF’s standard light machinegun appears to be better. A copy of the FN Minimi, it has a Picatinny rail on the dust cover and appears to be used frequently with an LPVO.

As Japan bolsters its military to deter China and other regional rivals, it should formulate a plan to comprehensively bring their infantry arms up to the Western standard. When the JGSDF’s new Amphibious Rapid Deployment Brigade was activated in April 2018—their first marine unit since WWII—the soldiers participating were seen only with iron sights. The average U.S. Marine rifleman qualifies with a 4x optic on his rifle.

Charlie Gao studied Political and Computer Science at Grinnell College and is a frequent commentator on defense and national security issues. (This first appeared in June 2018.)