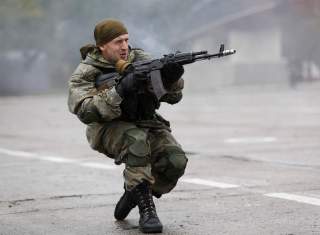 When combined with an open bolt gun like the Shpagin submachine gun, the results are catastrophic. Because of the fixed firing pin on the bolt of the gun, the cartridge detonated before the bolt was fully locked, destroying the firearm.

Russian infantry weapons have a reputation for reliability. The AK and PKM are renowned for enduring through adverse conditions, powered by their powerful long-stroke piston actions. However, a recent report by warhead.su suggests that when these weapons do fail in Russian service, the problem is often not in their design, but rather in the Russian ammunition they fire.

This is not a new phenomenon. Russian imported ammunition to the United States has always been regarded as “budget” brands, with inconsistent quality. But apparently, the same problems apply to Russian military ammunition.

The report opens with a story of a soldier operating a Kord 12.7-millimeter heavy machine gun. The soldier noticed the belt was a little lighter than usual, and when he pulled the trigger… the bullet got stuck in the barrel, not even passing the gas port on the barrel.

The cause for this is the inconsistencies in Russian powder manufacture. In addition to bullets getting stuck in the barrel, there are stories of guns shooting hotter than usual, and guns exploding due to too much powder being in a cartridge. Of course, for these reasons, Russian domestic ammunition is rarely the ammo of choice for Russian precision shooters.

Moving from powder problems, the report goes on to talk about primer problems. The primer is the small explosive component in the rear of the cartridge that detonates when the firing pin strikes it, setting off the rest of the gunpowder in a cartridge. It usually is placed in the “primer pocket” in the rear of a cartridge and then sealed with varnish to keep them in place.

Russian cartridges also have significant difficulty with this. The primers are inserted in backward or sideways and are sometimes missing the primer itself.

But those are the least of the primer flaws, being readily visible. Usually soldiers inspect their ammunition as they are loading them into their magazines, and such defects are readily spotted and thrown away. What’s worse is the harder to spot flaws of a protruding primer or defects in the workmanship of the primer itself.

Protruding primers pose great danger to soldiers, as the primer can get struck in the magazine, resulting in detonation. This has happened with some Russian ammunition, a picture was provided of a 9×18 Makarov round in a magazine that did this.

Russian primers have also proven to prove vulnerable to being punctured, which results in the hot gases of the powder detonating rushing back through the punctured primer onto the bolt face, which can significantly damage the firearm. They also have been known to fall out during the extraction cycle, falling into the fire control group of a firearm. This can potentially cause misfires, or lock up a gun.

Other problems include inconsistent depth of insertion of the bullet. This may cause some of the overpressure problems, but it definitely does not help the consistency of Russian ammunition. There were also issues with some cartridges being totally out of specification—being too long, for example.

When combined with an open bolt gun like the Shpagin submachine gun, the results are catastrophic. Because of the fixed firing pin on the bolt of the gun, the cartridge detonated before the bolt was fully locked, destroying the firearm.

These problems are not only reported on that site. Various videos from Spetsnaz veterans discuss ammunition problems that plagued their service weapons.

One of them singles out the special armor piercing 7N21 and 7N31 9×19-millimeter ammo of being particularly low quality and causing significant reliability problems in the issued PYa pistol.

Indeed, the photo of a bullet sticking out of the barrel linked above is a 7N21 round, as seen by the black stepped tip. Other sites have suggested that the PYa only chokes on ammo from certain factories, but this itself can be a seen as representative as an overall lack of ammunition standards in the supply of ammunition to the Russian police and military.

As one infantry veteran lamented: “The Russian arms industry makes reliable and simple weapons, but ammo quality just annihilates it.”