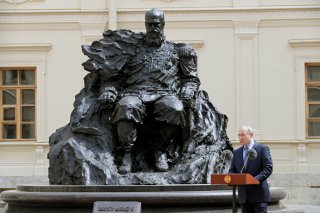 During the Soviet era, there were few warships named for past Russian rulers. While there have been a few submarines named for Czarist era admirals, the Russian Federation is reversing course. In two years, the seventh Project 955A (Borei-A) strategic nuclear-powered underwater cruiser is set to enter service, and she will bear the name Imperator Aleksandr III (Emperor Alexander III)—named for Czar Alexander III, who was Emperor of Russia, King of Congress Poland and Grand Duke of Finland from March 1881 until his death in 1894.

During his reign, Russia fought no major wars, and the late Czar was styled “The Peacemaker.” Alexander III, who was just forty-nine when he died, was succeeded by his eldest son Tsesarevich Nicholas, who took the throne as Nicholas II—the last Czar of Russia.

“The nuclear-powered cruiser Emperor Alexander III will become operational in the Pacific Fleet at the end of 2023. It will be floated out in December next year. In the second half of 2023, the missile-carrying cruiser will undergo a full cycle of trials, including the launch of a Bulava [intercontinental ballistic] missile,” the source added.

Imperator Aleksandr III is the seventh Project 955 nuclear-powered submarine and the fourth of the improved Project 955A sub-class. Currently, the Russian Navy operates four Project 955/955A submarines, while the fifth vessel Knyaz Oleg is now on track to be delivered to the Russian Navy by the end of this year.

The Fate of the Former Imperator Aleksandr III

The previous Russian warship to bear the name Imperator Aleksandr III was the third and final ship of the Imperatritsa Mariya-class dreadnoughts of the Imperial Russian Navy.

Built during World War I, the ship only entered service in July 1917, by which time the February Revolution had brought down the government of Czar Nicholas II. Renamed Volya (meaning “Freedom”), she entered service with the Black Sea Fleet, but it had been rendered ineffective following the revolution.

The warship saw no combat during World War I and following the peace with the Central Powers was surrendered to the Germans in 1918. Afterward, by the terms of the Armistice in November 1918, the dreadnought was turned over the White Russians and renamed General Alekseyev in honor of the Imperial Russian Army’s chief of staff during World War I. General Mikhail Vasilyevich Alekseyev died of heart failure in 1918 while fighting the Bolsheviks in the Volga region.

The newly named warship was used during the evacuation of the Crimea in 1920 and was then interned in French-controlled North Africa. She was sold for scrap, while her twelve-inch guns were later given to Finland for use as coastal artillery. Of the twelve main guns, eight made it to Finland, and were reportedly used against the Soviets during World War II, while four others were used as German coastal guns on the occupied Channel Island of Guernsey.

Russia may hope its new submarine, named in honor of “The Peacemaker,” has a career less colorful than that of the dreadnought to bear the name Imperator Aleksandr III.