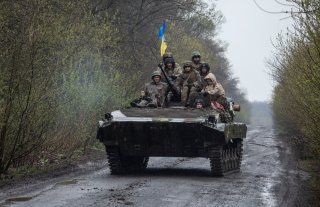 Two American volunteers fighting in Ukraine were reported missing on Wednesday and may have been captured by Russian forces—a development that, if confirmed, would raise troubling questions about a potential escalation in hostility between Moscow and Washington, according to the Telegraph.

The two men—Alexander Drueke, 39, and Andy Tai Ngoc Huynh, 27—were reportedly captured during a battle on the outskirts of Kharkiv, Ukraine’s second-largest city, according to an anonymous Ukrainian soldier from their unit. Drueke and Huynh are both veterans of the U.S. military who joined Ukraine’s International Legion of Territorial Defense early in the conflict; their primary duty was reportedly to explain how to use U.S. and other Western arms to Ukrainian troops more familiar with Soviet-era weapons.

According to the Alabama congressional delegation, where the two men lived prior to their travel to Ukraine, neither of the men have been heard from in several days but had not been confirmed dead, suggesting that they had been the first two Americans to be captured during the conflict. Rep. Terri Sewell (D-Ala.), the representative from Drueke’s home district, indicated that his family “had not heard from [him] in several days” and vowed to “do everything in our power to assist in locating him and finding answers for his family.”

National Security Council Coordinator John Kirby also made note of the two men’s disappearance during a scheduled press conference, adding that the White House would “do everything we can to get them safely back home.” He added that the United States discouraged its citizens from traveling to Ukraine to fight, noting that it was a “war zone” and fraught with risks.

“If you feel passionate about supporting Ukraine, there’s any number of other ways to do that that are safer and just as effective,” Kirby observed.

If the two men are confirmed to be captured, it would be a major propaganda coup for Russia, which would use their participation in the conflict as evidence of the United States’ direct involvement. The men might also be subjected to criminal punishment, as other foreign fighters have been. Earlier in the week, two British fighters in the International Legion were sentenced to death by a court in the Luhansk People’s Republic, a Russian-allied separatist statelet in eastern Ukraine, which claimed that the men were mercenaries rather than lawful enemy combatants.

So far, President Joe Biden has promised more than $40 billion in military and economic aid to Ukraine but has steadfastly refused to involve U.S. troops in the conflict.