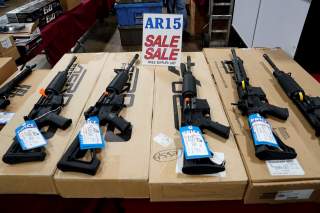 Introducing legislation to make a point makes total sense, but given that Daniels opposes his own bill, there seems like zero change these measures would ever become law. Of course, Daniels' introduction of the legislation coincided with the mass shootings at mosques in New Zealand that left 50 people dead — which, point made, I guess?

Introducing legislation to make a point makes total sense, but given that Daniels opposes his own bill, there seems like zero change these measures would ever become law.