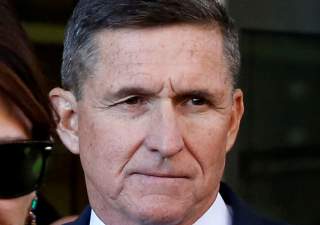 Federal prosecutors said Monday that Michael Flynn should serve up to six months in prison for lying to the FBI, a stark reversal from late 2018, when the government said that the former national security adviser should serve no jail time because he provided “substantial assistance” in multiple investigations.

Prosecutors asserted in a court filing Monday that Flynn failed to “complete his cooperation” agreement by trying to “thwart the efforts” of prosecutors handling the case of his former business partner, Bijan Rafiekian.

Flynn pleaded guilty on Dec. 1, 2017 to making false statements to the FBI during an interview on Jan. 24, 2017 regarding his contacts with Russian Ambassador Sergey Kislyak.

Flynn met numerous times with the special counsel’s office as part of the Russia probe. He also provided information to federal prosecutors in Virginia, who charged Rafiekian with acting as an unregistered agent of the Turkish government.

A Turkish businessman linked to the Turkish government hired Flynn’s consulting firm, Flynn Intel Group, in August 2016. Flynn was not indicted in the case, though Rafiekian and the businessman, Ekim Alptekin, were.

Rafiekian was convicted at trial, but the judge in the case overruled the conviction.

“Given the serious nature of the defendant’s offense, his apparent failure to accept responsibility, his failure to complete his cooperation — and his affirmative efforts to undermine — the prosecution of Bijan Rafiekian, and the need to promote respect for the law and adequately deter such criminal conduct, the government recommends that the court sentence the defendant within the applicable Guidelines range of 0 to 6 months of incarceration,” prosecutors said in their filing.

They also said that while Flynn met repeatedly with the special counsel, the information he provided in that investigation was not “substantial.”

Prosecutors recommended in December 2018 that Flynn receive no jail time due to his cooperation with the government. But Flynn pulled out of his sentencing hearing on Dec. 18, 2018 after District Court Judge Emmet Sullivan indicated he was prepared to hand down a sentence that included jail time.

In June 2019, Flynn fired his previous legal team and hired Sidney Powell, a defense attorney who was heavily critical of the special counsel’s probe.