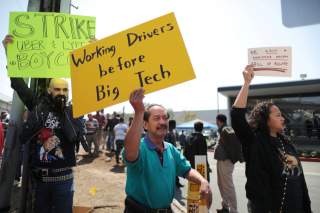 Uber and Lyft drivers in New York who were protesting against new changes to the companies’ apps brought traffic to a standstill in the city Tuesday morning.

About 300 drivers partook in the demonstration organized by the Brooklyn-based Independent Drivers Guild, which represents drivers who work for both rideshare apps, in retaliation of “unfair treatment of drivers” and app changes that came after the city implemented new wage regulations based on utilization, a Sept. 14 Facebook post from the guild reads.

The post called on Democratic New York City Mayor Bill de Blasio to “regulate” the city’s Taxi and Limousine Commission (TLC). The commission implemented a guaranteed minimum wage rule of $17.22 in the city in February “to provide drivers a minimum take-home pay for each trip after covering expenses,” according to TLC.

“Until we took needed action last year, it has been Uber and Lyft’s business model to oversaturate the market while promising drivers that they could succeed despite these companies’ stacking the deck against them,” Acting TLC Commissioner Bill Heinzen told the Daily Caller News Foundation in a Tuesday statement.

“The Mayor, TLC and City Council put in place smart policies to address the problems these companies created, and they are finally being forced to experiment with ways to run their businesses in an environment of accountability. We will continue to fight on behalf of drivers until they are able to make ends meet,” he continued.

Lyft and Uber have since restricted the number of drivers who are able to pick up riders in unpopular areas of the city. The apps added these limitations to avoid paying the minimum wage requirement for drivers who are less likely to get customers, The Wall Street Journal reported Sunday.

“Because of the TLC regulations, we’re forced to make changes to the Lyft app to not allow drivers to be online if there isn’t enough demand for rides. The TLC’s approach is bad public policy, and we are working diligently to support drivers during this change,” a Lyft spokesperson told the DCNF.

The Independent Drivers Guild called on de Blasio and the New York City Council “to stop the apps from violating the pay rules in an attempt to scam drivers out of fair pay,” in a statement according to NBC New York.

Under BQE by tillary Street @Uber_NYC and @lyft drivers by hundreds in protest driving over Brooklyn Bridge to FDR drive #1010wins pic.twitter.com/JRy6H2vgVJ

New York labor groups are looking to California for inspiration after the state’s Senate and Assembly passed legislation called AB5, which recognizes independent contractors working for app-based companies as employees, last week. Uber, Lyft and DoorDash threatened to spend a collective $90 million to lobby against the bill.

Uber did not immediately respond to the DCNF’s request for comment.