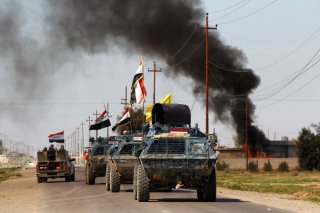 On October 17 protestors stormed the headquarters of the Kurdistan Democratic Party in Baghdad, attacking Iraq’s largest Kurdish political party. The protestors are linked to the Hashd al-Shaabi, or the Iranian-backed Popular Mobilization Units (PMU).  Two days later, the bodies of ten people from Iraq’s Sunni majority Salahuddin province were discovered. The kidnapping and murder of these individuals are reported to be at the hands of Asaib Ahl al-Haq, another PMU offspring.

The various Shiite militias which make up the PMU have evolved into Baghdad’s most pressing security threat. Although the PMU is technically part of the Iraqi Security Forces, radical splinter militias openly defy Iraqi law and work against the prime minister’s interests. The wrath of these violent militias has most recently been directed at Kurdish groups and U.S. diplomatic sites in the country. In late September, a series of rockets hit a U.S. installation in Iraq’s Kurdistan region. Within twenty-four hours, a rocket targeting a U.S. base by Baghdad’s airport hit a civilian home in a nearby district, killing several people. In fact, Baghdad’s fortified Green Zone, home of the U.S. embassy among other foreign diplomatic sites, has been the target of dozens of rocket attacks at the hands of these militias since January.

As the attacks by PMU militias have continued to escalate at an alarming rate, Iraqi Prime Minister Mustafa al-Kadhimi has made some steps to rein them in. In early July, a raid ordered by Kadhimi led to the arrest of fourteen Kataib Hezbollah (PMU) militiamen accused of planning an attack against Baghdad’s Green Zone. Although many were released within a few days, Kadhimi demonstrated his commitment to prioritizing these militias which have never been confronted by previous Iraqi administrations.

Although the threat Iraq faces by PMU forces is paramount, the prime minister’s attention has been diverted by an equally menacing peril—Turkey. Under the direction of Turkish President Recep Tayyip Erdogan, Ankara has led several military operations against targets in Iraq, violating the country’s sovereignty. On August 18, two high-ranking Iraqi security officials were killed by a Turkish airstrike near the Iraqi-Turkish border. Two months earlier, Turkey and Iran launched joint military operations against Kurdish targets in Northern Iraq. These coordinated land and air operations, dubbed Operation Claw-Tiger and Operation Claw-Eagle, underscore Turkey’s escalating military campaign along its shared border with Iraq.

Evidence of Turkish and Iranian meddling in external disputes is not just limited in Iraq. Under Erdogan’s direction, Ankara has inserted itself in several regional conflicts across the globe. In addition to Turkey’s flagrant aggression in the Mediterranean Sea, its involvement in the current Azerbaijan-Armenian conflict unfolding in Nagorno-Karabakh is alarming. Ankara has provided troops, military equipment, and incessant propaganda on behalf of Azerbaijan, stirring the bloodshed which has already led to hundreds of deaths.

Similarly, Iran’s malign involvement extends throughout the Middle East. Tehran uses terror proxies like the Popular Mobilization Units and Hezbollah to support and export the authoritarian interests of its leaders. In Lebanon, Hezbollah has extended its influence over the country’s economy, political sphere, and military complex. The terror proxy has thousands of active fighters on the ground and has successfully smuggled funds and weapons from Tehran for decades. In response to fighting in Nagorno-Karabakh, Iran has recently deployed Islamic Revolutionary Guard Corps (IRGC) troops to its northwestern province along the disputed territory’s border on October 25.

U.S. policy has largely focused on isolating Iran and its militant proxies in recent years. At the same time, Turkey has been able to extend its military influence unchecked across the globe. As the upcoming U.S. election looms, presidential candidates must contend with how best to confront the growing threat Turkey poses.

Maya Carlin is an Analyst at the Center for Security Policy based in Washington D.C., she is also an MA candidate in Counter-terrorism from IDC Herzliya.