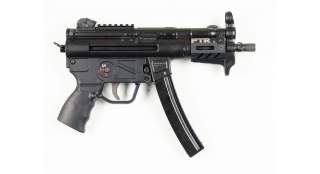 The American demand for military-style weapons isn’t just limited to the AR-15 platform.

The new PTR 9KT pistol is a derivative of the famous German MP-5 submachine gun. Lighter and with a shorter barrel it was also likely developed for some military purpose, namely the U.S. Army’s Sub Compact Weapon program.

The MP-5 submachine gun was originally developed by German—then West German—arms manufacturer Heckler and Koch. The MP-5’s origin lies in the G3 battle rifle. Developed for the West German Army, the G3 was based on the CETME rifle invented by German small arms designers that had moved to Spain after World War II. The CETME and the G3 were both pioneering users of a delayed blowback operating system designed to reduce recoil.

The G3 rifle was a full-sized battle rifle, made of stamped metal parts and plastic and designed to fire a 7.62-millimeter cartridge. Heckler and Koch created a submachine gun simply by taking the design and scaling it down, moving from 7.62-millimeter to 9x19 millimeter Parabellum. The new weapon the MP-5, or Maschinenpistole 5, featured a shorter barrel and smaller, thinner 30 round magazines. Externally the MP-5 was nearly identical to the G3, making transitioning training from battle rifle to submachine gun easier to do.

American gun manufacturer PTR Industries has made a business out of building G3-type weapons in the United States. The company received original blueprints for the G3 rifle, then out of production, as well as original Heckler and Koch tooling for the rifle. The company began producing copies they called the PTR91 but have recently branched into MP-5 type weapons.

The PTR 9KT is a very close copy of the MP-5, specifically the shorter MP-5K (“k” for “kurtz,” or “short”). The MP-5K has an 8.85 inch barrel while the 9KT has an even shorter barrel, at just 5.16 inches. The 9KT lacks the MP-5K’s forward pistol grip, in order to comply with U.S. federal firearms law. The 9KT is also classified as a pistol and not a submachine gun, and as such doesn’t have a butstock. PTR’s pistol instead has a single point sling that could, fully outstretched, provide a level of stability while firing. It also has the original mounting rails for a shoulder stock.

The 9KT is based on PTR’s 9C pistol, which has the longer barrel length of the MP-5K. The 9KT has an overall length of just 13.38 inches and a weight of 4.8 pounds. The trigger has a pull weight of just 4.8 pounds, nearly half as much as the 9C. It is also modifiable to include a full auto sear pack. Once installed, the sear pack should give the 9KT a fully automatic rate of fire of about 600 rounds per minute. The 9KT also has Heckler and Koch pattern iron sights, including a hooded front blade sight and wheel rear sights.

The 9KT’s 5.16 inch, three lug barrel is the shortest offered by PTR and is threaded to a ½ by 28 thread pattern to fit muzzle brakes, compensators, flash hiders, or a suppressor. The barrel is nitride treated to create a long-lasting finish. Internally the barrel features a 1 in 10 inch barrel right hand barrel twist to accommodate common 9x19 Parabellum ammunition types.

One feature that brings the MP-5 pattern weapon into the 21st century is the ability to install aftermarket accessories that aid in aiming. The top of the 9KT receiver is fitted with a Picatinny rail capable of mounting a variety of optics including red dot sights, holographic sights, and other. The handguard has been updated to feature M-LOK mounting system slots for items such as flashlights and lasers.

One question about PTR and Sig Sauer: why did both companies suddenly market subcompact submachine guns/pistols, the PTR 9KT and Sig Sauer Copperhead, based on their existing designs just in time for the 2019 SHOT Show? We know that both companies were invited to submit trial weapons for the U.S. Army’s Sub Compact Weapon (SCW) program, with PTR’s entry known as the 9CS. It seems very likely that the 9KT is a civilian legal version of the 9CS, lacking only a shoulder stock and the ability to fire fully automatic. If PTR (or Sig Sauer) did manage to win the SCW program, it would be positioned to sell these weapons to gun owners eager to purchase the next new thing the U.S. Army is buying.

Whether or not PTR ends up winning the Army contract or not, the 9KT is still an interesting “pistol” based on the historically significant MP-5 submachine gun. Updated for the 21st century, 9KT could serve as an excellent home defense pistol or range plinker. The MP-5 pattern may be gradually retiring from military and police arsenals worldwide, but 9KT’s future in the U.S. domestic market may still be a bright one.

Kyle Mizokami is a defense and national security writer based in San Francisco who has appeared in the  Diplomat, Foreign Policy, War is Boring  and the Daily Beast.  In 2009 he cofounded the defense and security blog Japan Security Watch. You can follow him on Twitter:  @KyleMizokami.