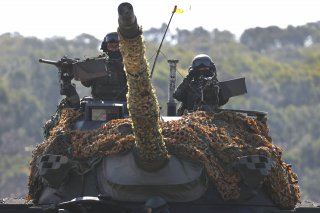 Faced with increasing pressure from China during the second half of 2021, the Taiwanese government has taken steps to revamp military training to its small volunteer force. A recently released white paper authored by the Taiwanese Ministry of National Defense suggested that the People’s Liberation Army already had the capacity to blockade the island quasi-nation. A separate assessment conducted by the Defense Department indicated that the Chinese military could have “the capabilities to counter the US military in the Indo-Pacific region, and compel Taiwan's leadership to the negotiation table on Beijing's terms” by as early as 2027.

Fears of Chinese military domination have led Taiwan’s government, led by President Tsai Ing-wen, to pursue a military modernization strategy heavily dependent on weapons imports from the United States. In 2020, the Trump administration agreed to sell Taiwan more than $5 billion in arms; so far, $750 million has been spent during the Biden administration.

The Taiwanese defense ministry has also asked for an extra allocation of $9 billion over the next five years for further upgrades, in addition to its existing budget. The country’s military, which is reliant on a national service draft, is capped at 188,000 men under arms and rises to 215,000 if other troops, including trainees and contractors, are included. Additionally, the country has approximately one million reservists who completed their service within the past eight years, which it can depend on to perform a support role in the event of a conflict.

The country’s national service system has come under scrutiny in recent months. In 2013, the draft system was overhauled, lowering the compulsory military service time from two years of service to only four months, in addition to occasional recall training sessions. This training has been cited as insufficient to develop professional military skills, and some defense planners have pushed for it to be extended. Some have also argued that, given the limitations of the short draft period, greater specialization is needed, so that soldiers can effectively be trained to fill a role rather than receiving minimal training in multiple roles.

The Taiwanese defense strategy has long been based on the concept of “asymmetric defense,” focused on inflicting disproportionate losses against an invading Chinese army. There are more than two million soldiers in the People’s Liberation Army, making it the largest army in the world by most metrics; all Chinese troops are volunteers, although the country employs a draft registration system if needed.