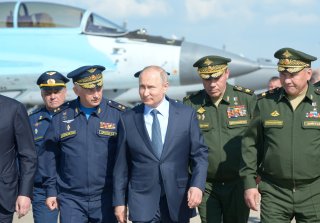 Russia has launched its ARMY-2022 military exhibition, an annual event intended to showcase the latest in Russian military hardware.

The military exhibition kicked off with an opening address from Russian president Vladimir Putin. “We are happy to receive in Russia, at the now traditional venue of the Patriot Park, the heads and delegations of defence departments, defence industry representatives and military experts from many countries,” Putin said. “At this year’s forum, about 1,500 domestic defense industry enterprises will present over 28,000 modern samples of military and dual-use products,” he added. The Russian president reiterated his long-standing claim that Russia is the world’s leader in cutting-edge military hardware. “Future-oriented advanced models and systems that will shape 'tomorrow' of our Armed Forces are of special interest. We are talking about high-precision weapons and robotics, combat systems based on new physical principles,” he said.

Delegations from seventy-two countries attended the expo, according to Russian state media reports. The full list of foreign attendees at ARMY 2022 was not immediately made available. “Russia sincerely appreciates historically firm, friendly and truly trustworthy relations with Latin American, Asian and African states,” Putin said. “We are ready to offer our allies and partners cutting-edge weapons – from small arms to armored vehicles and artillery, combat aviation and drones.”

Putin only briefly commented on the ongoing Ukraine war. “Today, our warriors are honorably performing their duty together with Donbass fighters in the course of the special military operation. They are fighting for Russia and peaceful life in the Donetsk and Lugansk people’s republics. They are performing all the tasks that have been set with precision, gradually liberating the land of Donbass,” he said. The Donetsk and Luhansk People’s Republics (DPR and LPR) are self-proclaimed separatist governments in eastern Ukraine’s Donbass region, recognized by Moscow as sovereign states just three days prior to its invasion of Ukraine.

Putin also reaffirmed Russian defense minister Shoigu’s previous announcement that Russia will convene the first “International Anti-Fascist Congress” as part of the ARMY 2022 forum. “The lessons of the terrible tragedy to which Nazism led mankind in the 20th century must not be forgotten. Our duty to the memory of the millions of victims of the Second World War is to respond harshly to any attempts to falsify history, to counteract the spread of any form of neo-Nazism, Russophobia and racism,” Putin said in his address. As part of its justification for invading Ukraine, Moscow has accused Kyiv of “neo-Nazi” leanings over its alleged mistreatment of and atrocities against Russian speakers.

ARMY is an annual Russian defense exhibition held during the summer in the Moscow region’s Patriot Expo Center. The event has traditionally served as a platform for Russian defense manufacturers to market their products to foreign observers.