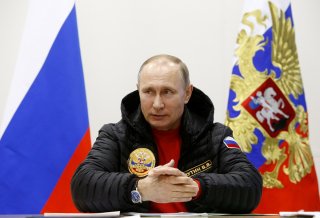 The melting Arctic is opening a treasure chest of... Russian strategic planning documents. Indeed, 2020 has seen an overhaul of Russian Arctic strategy, as previously examined here. This week Putin approved the “Strategy for the Development of the Russian Arctic Zone (RAZ) and provision of National Security through to 2035.” This document is essentially Moscow’s blueprint to deliver on key aims and objectives of Russian Arctic strategy (as laid out in this year’s earlier Arctic release—the “Foundations of State Policy of the Russian Federation in the Arctic to 2035”).

Russian Arctic strategy is a mosaic of policies and agendas driven by a litany of government agencies. Fundamentally, there are three policy documents to be read together when considering Russia’s Arctic strategy. As noted above, there is the “State Policy” document which outlines key goals and Moscow’s Arctic agenda. Then we have the state program on “Socio-Economic Development of the RAZ.” The “Socio-Economic Development” program is essentially the implementation plan. Russia’s National Security Council flagged drafting of the “Strategy for Development,” the third document, back in February. Released this week, this third document outlines the mechanisms for which “State Policy” and the “Socio-Economic Development” plans in the Arctic are to be realized.

Russia is the largest stakeholder in Arctic affairs by way of sheer geography. Moscow’s RAZ is as much about the onshore Russian Arctic territory (the entire zone of Russia above the Arctic Circle) as it is the offshore Russian Arctic. The offshore RAZ is legitimately Russian under the auspices of the international legal architecture—UNCLOS. The popular sense of Russian expansion into the Arctic Ocean is rather ill-informed. Nonetheless, Russian Arctic policy documents refer to the RAZ as opposed to the broader sense of the Arctic global commons.

Given the significance of resources and economic investment (let alone the sheer size of the open Arctic border), the RAZ holds evident national security standing. The “2020 Strategy for Development of the RAZ” outlines various challenges to the pace and process of Moscow’s development goals in its region as posed to national security. In a departure from Arctic policy documents coming out of Washington, Moscow features the challenge of climate change (man-made and “natural” variants). Population decline in the RAZ territories and evident challenges related to the sub-par quality of life afforded to Arctic residents are further roadblocks to development ambitions. The “Strategy for Development” outlines failing social services, inadequate housing, lack of transport, and broader infrastructure challenges as issues to overcome. Further, occupational work risks (associated with energy industries in the RAZ) and underfunded emergency health capabilities are leveled as challenges to the development of the Russian Arctic.

Most of the challenges tabled in terms of developing the Russian Arctic are indeed domestic in nature. Which is not surprising. Even the one reference in the document to external competition is linked to the impact an “increase in conflict potential” of the Arctic will have on domestic development goals in the RAZ. This is again to be expected given the rationale of this policy document—how the state plans to build the necessary infrastructure and baseline for achieving the strategic Arctic goals. For instance, to be an Arctic energy superpower in export terms, the RAZ needs hospitable industrial towns—Moscow needs to attract the workforce for the labor-intensive energy industry.

Next, the “Strategy for Development” outlines how Moscow plans to counter these domestic challenges. The focus here is on the social development of the RAZ via the implementation of social support from investment in health care and education. Priority is to be placed on state-funded programs which will ensure modernization and accessibility of goods and services in the RAZ. The development of small-to-medium enterprises, support for cultural heritage programs, and the creation of modern urban cities are further objectives in countering regional challenges. Overall, the creation of modern urban cities in the RAZ is the end-goal for Russia’s Arctic development strategy.

Spending is evidently underway with a slew of projects greenlit in this development strategy. Crafting the RAZ into a tourist haven along with the production of a Russian cruise ship fleet are flagged. As is the implementation of new shipping lanes in the Northern Sea Route (NSR) and the Barents, White, and Pechora Seas. Security watchers will be enticed by the development strategy’s note that Moscow will stand-up a headquarters for NSR Maritime Operations. Further, Russia’s Arctic development strategy calls for five more nuclear-powered icebreakers (of the 22220 Project), three nuclear-powered icebreakers out of the Leader Project, sixteen rescue and tug vessels, three hydrographic vessels, and two further ships. This procurement is bolstered by a new cargo ship program to support merchant shipping in the RAZ.

In terms of delivering on the RAZ’s development goals, Moscow reiterates the necessity for a cooperative Arctic region. Indeed, conflict is not only bad for a burgeoning energy export business. It is costly and will divert funds and manpower from the RAZ industry. The Kremlin will implement a “multi-vector” foreign policy to ensure the Arctic remains a “territory of peace, stability and mutually beneficial cooperation.” The concept of mutually beneficial cooperation is somewhat of a crowd favorite in Putin’s Russia. In the RAZ energy sphere, this screams “work together, until it no longer works”—with a dash of Russian rules and regulations. Nonetheless, the “Strategy for Development” reminds Arctic neighbors that engagement will occur on the basis of “international treaties, agreements, and conventions.” Of course, international law in the Arctic falls well and truly in Russia’s favor to uphold.

Should mutually beneficial cooperation fail, there is also a pointed military security development strategy for the RAZ. Here, Moscow outlines development plans for the structure of the Armed Forces in the region. Seeking to maintain a “level of combat readiness of the groupings” in the RAZ, the development plan outlines priority to equip Armed Forces with modern kits “adapted to Arctic conditions.” Development of base infrastructure is placed in the context of a move towards the RAZ housing technology and infrastructure with “dual-use” purpose. The rationale becomes: defend the RAZ and northern frontier from aggression while aiding in search and rescue capacities where needed.

All in all, there is not too much out of the ordinary in this policy document. Of interest is the framing of “equality” with Norway regarding the increasingly touchy issue of Svalbard. In this strategy, Moscow clearly signaled “Russian presence in Spitzbergen” will continue. As are the indications of Russia’s Arctic Council Chairmanship platform—for the period of 2021-2023. Coordination with Arctic States will continue, primarily in the “framework of the Arctic Coast Guard Forum.” The role of the Arctic Economic Council as “one of the central forums for sustainable development” in the Arctic is also placed squarely in Moscow’s Chairmanship planning.

We can expect Moscow to keep tensions low in the high north at the helm of the Arctic Council. The “Strategy for Development” further underlines the importance to Russia of the “effective participation” in the Council for realizing its development objectives. Priorities of its 2021-2023 Chairmanship will likely include the “sustainable development of the Arctic” and programs supporting the cultural heritage of indigenous peoples throughout the Arctic.

2020 has seen a deluge of Arctic interest from Moscow in terms of investments, military footprints, and indeed, Kremlin policy planning documents. Some lofty ambitions continue to sneak into these planning documents, with this recent decree putting NSR cargo at 130 million tons per year by 2035. In 2019 the NSR managed just 31.5 million tons. Of course, further Kremlin policy for the RAZ will be unveiled no doubt as we await the updated Russian “National Security Strategy” due in 2020. Something tells me this burst of Russian Arctic policy documents will do very little to alleviate warming tensions in the Arctic, let alone freeze the pace of hot takes signaling the arrival of a ‘new’ Cold War.

Dr. Elizabeth Buchanan is a lecturer of Strategic Studies at Deakin University, Australia, based at the Australian War College, and Fellow at the Modern War Institute, West Point. @BuchananLiz

Image: Russian President Vladimir Putin chairs a meeting on an integrated development of the Arctic at a military base in Alexandra Land in the remote Arctic islands of Franz Josef Land, Russia March 29, 2017. Picture taken March 29, 2017. REUTERS/Sergei Karpukhin