Putin and Erdogan Just Doubled Down on Defense Ties 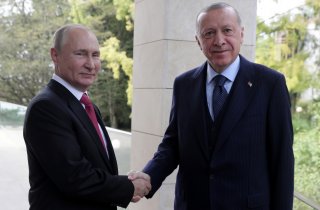 Fresh off a bilateral meeting, Russia and Turkey announce sweeping plans to deepen their defense ties.

Turkish president Recep Tayyip Erdogan traveled to the Russian resort town of Sochi on Wednesday to meet with his counterpart Vladimir Putin. Syria was the main item on the agenda, with Erdogan trying to dissuade the Russian president from backing a Bashar al-Assad government offensive against the northwestern outpost of Idlib. The status of those negotiations remains unclear, with neither leader holding a press conference or otherwise revealing concrete details from the meeting to the media.

But Kremlin spokesman Dmitry Peskov shed some light on the meeting the following day, telling reporters that the two leaders made strides in the sphere of defense cooperation. "They spoke about extending cooperation in the military and technical sphere as well as the maintenance and future cooperation regarding S-400 [air defense systems], and discussed a possibility of manufacturing certain components of the [S-400 system] on the territory of Turkey," said Peskov.

Erdogan previously doubled down on Turkey’s stated plans to purchase a second batch of Russian S-400 “Triumf” missile defense systems. Erdogan suggested in an interview with CBS correspondent Margaret Brennan last week that he reserves the right to purchase more Russian defense systems: “In the future, nobody will be able to interfere in terms of what kind of defence systems we acquire, from which country at what level. Nobody can interfere with that. We are the only ones to make such decisions,” he said. It does not appear, however, that Ankara has any immediate plans to sign a contract for a third shipment of S-400 regiments.

The prospect of a joint Russian-Turkish production venture on the S-400 system is not new; Rostec chief Sergei Chemezov made the same suggestion as far back as 2019. Peskov’s carefully-worded statement reconfirms that a licensed production deal for fully-manufactured Turkish S-400’s is not in consideration. Rather, the two sides are reportedly discussing the possibility of a local production deal assigning specific S-400 components to Turkish manufacturers.

Turkey signed a contract for its first S-400 shipment in 2017, setting off a diplomatic firestorm that led to its ejection from the F-35 partner program and later U.S. sanctions under the  Countering America’s Adversaries Through Sanctions Act (CAATSA).  U.S. Senate Foreign Relations Chair Robert Menendez (D-NJ) threatened Turkey with additional CAATSA sanctions earlier this month if Ankara goes through with its most recent S-400 import bid.

Erdogan revealed that Moscow and Ankara are exploring additional defense cooperation opportunities beyond the S-400. "We had the opportunity to discuss comprehensively what steps to take in the production of plane engines, what steps to take regarding fighter jets," the Turkish president reportedly told journalists after the meeting. The Turkish leader added, without elaborating, that the two sides discussed possible venues for cooperation in shipbuilding and submarine technology.

Moscow has repeatedly expressed its interest in cooperating with Turkey on its TF-X fifth-generation fighter project, with Russian manufacturers offering to provide engine technology for Ankara’s new fighter. Erdogan previously said he does not exclude Turkey’s potential purchase of Russian jet fighters—notably, the Su-35S air superiority fighter and the export version of the Su-57 fifth-generation stealth fighter—but there is no indication that Moscow and Ankara are currently engaged in talks along these lines.