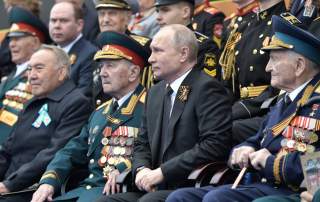 President Vladimir Putin is writing an article to justify the Molotov-Ribbentrop pact, which paved the way to the Second World War. Leaders generally do not attempt to excuse their countries’ agreements with Hitler. Why is Putin obsessed with vindicating his predecessors’ Nazi ties?

The “Great Patriotic War” is endowed in Russia with near religious significance as a defensive conflict, in which Soviet soldiers heroically fought off Nazi aggressors after the war began on June 22, 1941. This year marks the 75th anniversary of the war’s conclusion, with massive celebrations throughout Russia planned for “Victory Day.” To mark the occasion, officials are already issuing mass promises of amnesty for crimes in honor of the victory.

However, the Russian narrative is misleading. The war did not begin in 1941 — it began nearly two years earlier when the Soviets and Nazis jointly invaded Poland. Last year, the European Parliament (EP) condemned the evils of Nazism and Stalinism together on the 80th anniversary of the signing of the so-called “non-aggression” pact, in which a “secret protocol” divided Europe into spheres of influence between the fascists and the communists. As a result, the pact enabled the invasion of Poland, Stalin’s “Winter War” with Finland, and eventually resulted in Nazi approval for Soviet military occupations of the Baltic republics and part of Romania — all before the Russians today claim the war began.

Since the EP’s announcement, Putin has repeatedly attempted to rationalize the pact. In December, at a national televised press conference, he defended the Soviet decisions when answering a question about the EP resolution. The next day he hosted a special “informal summit” with the leaders of the Commonwealth of Independent States where they examined “archival materials” to prove that the Soviets were circumstantially forced to enter the pact with Hitler. The next week, he returned to the issue at his annual board meeting with top officials from the Ministry of Defense.

The war ended nearly 75 — and the USSR nearly 30 — years ago, but the current Russian leadership cannot allow the national memory of it to be one in which their progenitor nation shares blame for starting it.

An unambiguous moral victory over a universally reviled evil is an inspiring story, and Putin needs an inspired Russian citizenry to maintain his aggressive foreign policy. Since the USSR’s dissolution, the Russian Federation has invaded Georgia and Eastern Ukraine, annexed Crimea, sent mercenary groups around Africa, mercilessly bombed opponents of the Assad regime (including civilians) in Syria, waged concerted disinformation campaigns worldwide, and attempted to influence foreign elections. Such an active military has need of volunteers. If potential recruits only know stories of heroes fighting against evil, perhaps they will be more willing to take up arms and lay down their lives for their leader.

This article first appeared in AEIdeas.