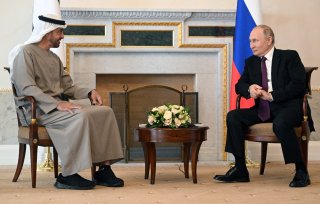 President Mohammed bin Zayed Al Nahyan (MBZ) of the United Arab Emirates (UAE) met with Russian leader Vladimir Putin in Saint Petersburg on Tuesday, affirming the close political and economic ties between the two nations only days after the OPEC+ oil cartel announced that it would raise oil prices.

In his remarks, Putin praised the Emirati leader, calling relations between Abu Dhabi and Moscow “an important factor of stability” in the Middle East and commending him for supporting the oil price increase despite Western pressure.

“Our decisions … aren’t directed against anyone,” Putin said. “Our actions are aimed at ensuring stability in global energy markets to make both consumers of energy resources and those who deal with production and supplies feel calm, stability, and confidence.”

The UAE’s state-run WAM news agency indicated that MBZ had “affirmed” his intentions to “strengthen … the foundations of global peace and stability” through diplomacy. Without elaborating, WAM claimed that the two leaders had “reviewed a number of regional and international issues … of common concern.”

However, the OPEC+ announcement on October 5—in which the international oil cartel stated its intention to cut oil production by two million barrels per day, a development certain to cause price increases—was received with open hostility in the West. Many Western lawmakers framed the decision to raise oil prices as a cynical attempt by oil-producing nations to benefit from the economic turmoil in the wake of Russia’s invasion of Ukraine. Some commentators also observed that the announcement came less than one month before the critical U.S. midterm elections, leading to speculation that the move was intended to weaken President Joe Biden politically.

Although the United Arab Emirates and the United States have maintained a close security partnership, and the U.S. government has helped to defend the UAE against strikes by the Houthi rebels in nearby Yemen, Abu Dhabi resisted U.S. efforts to side against Russia following the invasion of Ukraine. The UAE voted in favor of a resolution condemning the invasion in March and has provided humanitarian aid to Ukraine, but has otherwise remained neutral in the conflict by refusing to participate in international sanctions against the Kremlin. The UAE also remains open visa-free to Russian travelers—a development that led to an influx of visitors at the start of the conflict and again in late September after Putin announced the conscription of Russian reservists.