Putin Is Not Happy About U.S. and NATO Naval Activity in the Black Sea 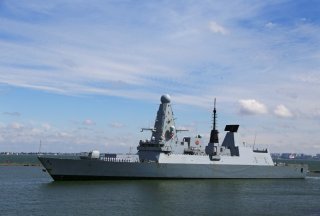 Russian president Vladimir Putin is “concerned” with NATO’s military activity in the Black Sea, said Kremlin spokesman Dmitry Peskov. It is “absolutely a matter of concern to him and he has spoken about this,” Peskov told reporters today, adding that the U.S. and Russian militaries are engaged in active deconfliction talks to stave off a regional conflict.

Putin reportedly raised these concerns during a phone call with acting German chancellor Angela Merkel: “The destabilizing and dangerous nature of the provocative activity of the U.S. and a number of other NATO countries in the Black Sea was noted,” read a Kremlin press statement, stressing what Moscow describes as the “unscheduled” nature of these movements.

Russian defense minister Sergei Shoigu told reporters earlier this month that U.S. and NATO guided-missile ships are attempting to “test” local Russian forces in the Black Sea region. “Well, you know when we see this: when a warship belonging to a non-regional power enters the Black Sea and we understand that it carries long-range precision weapons, when we see that these weapons are aboard it and it is not on a tourist tour, we, naturally, keep a close eye on it and track it and we understand that any provocations are possible at any time as was the case recently with a British destroyer and, of course, we must prevent such things,” said Shoigu, referring to an incident this summer in which the Russian military allegedly dropped bombs and fired warning shots to chase the British Type 45 destroyer HMS Defender out of Moscow’s claimed territorial waters off the Crimean coast.

“To speak more exactly, this is, of course, almost a constant attempt to test us to see how much we are prepared and how effectively we have built our system along the Black Sea coast and generally in the south of our country,” Shoigu added. “As I understand it, they are subsequently planning drills with our neighbors, drills with the Georgian and Ukrainian navies. But we also hold drills and will keep doing so.”

The command ship USS Mount Whitney and Arleigh Burke-class destroyer USS Porter, both belonging to the U.S. Sixth Fleet, are conducting joint movements in the Black Sea. According to press statements issued by the U.S. Naval Forces Europe and Africa/U.S. Sixth Fleet Public Affairs, Porter and Whitney are in the Black Sea to support regional NATO allies and partners. “NATO allies and partners stand together to ensure a safe, stable, and secure Black Sea, building partner capacity to improve effectiveness and interoperability,” read a press release from November 5. Defense Secretary Lloyd Austin traveled to Romania, Georgia, and Ukraine in late October to reassure Washington’s regional allies and partners in the face of mounting military tensions with Moscow.