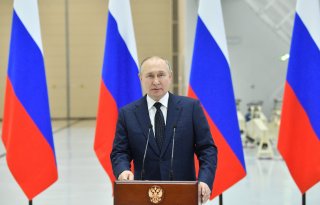 Russian leader Vladimir Putin gave a televised address on Wednesday morning announcing a partial conscription of Russian reservists—a move that would expand the country’s army after a series of prominent military defeats during its invasion of neighboring Ukraine.

“For the defense of our motherland, its sovereignty and territorial integrity, and to ensure the security of our people and those in the [Russian-occupied] territories, I deem it necessary to support the proposal of the Ministry of Defense and the General Staff for partial mobilization,” Putin said. He indicated that the mobilization would start immediately, and the Federal Assembly and the State Duma, Russia’s two legislative chambers, would be informed of the new development.

“I stress that it is a partial mobilization,” Putin added. “Only those who are currently in reserve will be conscripted.”

Putin claimed during his remarks that the Russian “special military operation” against Ukraine had been “preemptive” and “absolutely necessary,” and noted that Russian forces had successfully captured nearly all of the contested Donbass region from Ukrainian forces. The Russian leader claimed that four major Russian-occupied Ukrainian regions—the Donetsk People’s Republic and Luhansk People’s Republic in Donbass and the Kherson and Zaporizhzhia regions in southern Ukraine—would each hold referendums to join Russia in the near future. Putin vowed that the Kremlin would attempt to maintain security during the vote.

However, Putin also alleged that Ukrainian troops were “trained by NATO standards,” commanded by Western officers, and involved the heavy use of “mercenaries”—likely a reference to foreign volunteers within the Ukrainian armed forces, whose employment has been controversial.

“Today, our army … is acting along the military front line exceeding 1,000 kilometers,” Putin said. “They are facing not just the [Ukrainian army], but the whole military machine of the collective West. In this situation, I deem [the partial mobilization] necessary, which is appropriate in full to the threat we are facing.”

Russian defense minister Sergei Shoigu confirmed after Putin’s speech that 300,000 reservists would be mobilized, and steps would be taken to ensure that each received sufficient training for their role in the conflict.

Russia’s unusual military structure involves a hybrid of a professional contract system and a draft system for short-term conscripts. After their one-year term of service ends, Russian conscripts are added to the country’s reserve forces. In principle, this system gives the Russian armed forces a pool of around two million reservists with prior military experience. However, an Institute for the Study of War (ISW) report published in early March claimed that “few [reservists] are actively trained or prepared for war,” citing severe deficiencies in the military’s ongoing training programs. A RAND Corporation study published in 2019 estimated that fewer than 5,000 of Russia’s reservists had training or experience equivalent to their Western counterparts.