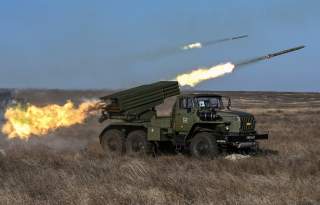 KYIV, Ukraine—Saturday marked the fifth anniversary of the day the war in Ukraine was supposed to end. But it never did.

On early Tuesday fighting flared in Ukraine’s eastern Donbas region when Russian-backed forces assaulted Ukrainian troops as they occupied an observation post near the front-line town of Zolote.

Under intense shelling, Ukrainian forces were dislodged from their positions, the Ukrainian military reported. Ukrainians held their ground when a separate combined Russian-separatist attack hit their forces near the town of Orikhove that same day.

The fighting also threatens to derail an ambitious, ongoing gambit for peace with Russia by Ukrainian President Volodymyr Zelenskyy—an effort that has recently shown promising signs of progress.

“This is not just a cynical provocation, the purpose of which is to press on the Debaltseve wound that will never heal completely. This is an attempt to disrupt the peace process in Donbas, which has begun to move forward, albeit in small, but relentless steps,” Zelenskyy said on Tuesday.

“Our course towards ending the war and adherence to international agreements remains unchanged—as does our determination to repulse any manifestations of armed aggression against Ukraine,” Zelenskyy added.

According to Kyiv, the Russian-backed forces behind Tuesday’s attacks used heavy weapons banned by the operative Minsk II cease-fire, including mortars and artillery. The Organization for Security and Cooperation in Europe, or OSCE, reported 2,300 explosions on the front lines in eastern Ukraine before noon on Tuesday.

The flare-up was unusually intense for the war in its current, stalemated condition. Some see the surge in violence as a reminder of how precarious the status quo, frozen war in the Donbas remains.

It is a conflict in which Europe’s two largest standing land armies in terms of manpower—those of Russia and Ukraine—continue to take pot shots at each other. And, as Tuesday’s violence clearly shows, the conflict could quickly and unpredictably spiral into something much worse.

“There is an ongoing war in our country, it hasn’t ceased. The fact that this attack was on the fifth anniversary of the Debaltseve battle was extremely cynical,” Zelenskyy’s chief of staff, Andriy Yermak, said Tuesday in a social media post.

Today, the conflict in Ukraine’s eastern Donbas region remains a limited, conventional war, mostly fought from trenches. It’s like World War I trench warfare on a smaller scale—and with a high-tech edge.

And the war is still lethal.

More than half of the war’s nearly 14,000 combat-related deaths have occurred since the failed February 2015 cease-fire, known as Minsk II, went into effect. The war has also wounded more than 30,000 people and displaced about 1.5 million more from their homes.

In the Donbas warzone, one Ukrainian soldier still dies in combat every three days, on average. And civilians are often caught in the crossfire, too—most often these days due to land mines.

“The Kremlin continues to pursue a strategy of escalation in Donbas in flagrant violation of Russia’s obligations, which they have undertaken as a party to the Minsk agreements,” Serhiy Kyslytsya, Ukraine’s United Nations ambassador, said at a U.N. Security Council meeting in New York City on Tuesday.

“The seized areas turned into a land of fear and terror,” Kyslytsya said.

The Kremlin distanced itself from Tuesday’s fighting, reiterating a long-held line that its forces are not involved at all in the 6-year-old war.

“We don’t have the details of the clash, we don’t know what triggered the clash. We read there are casualties on both sides, which we find unfortunate and express our hope that soon we will be able to clarify the details of what happened before going for any conclusions,” Kremlin spokesman Dmitry Peskov told reporters on Tuesday.

Hours after the assault in eastern Ukraine Tuesday morning, Putin fired Vladislav Surkov, his point man on Ukraine policy since 2013. Some Ukrainians see the parallel timing as evidence that Tuesday’s assault may not have been wholeheartedly sanctioned by Moscow.

Surkov was widely regarded as a hardliner and the architect of Russia’s war on Ukraine. Dmitry Kozak, Surkov’s replacement, is widely seen as a more moderate voice.

The staff shake-ups in both Moscow and Kyiv could signal a commitment to peace negotiations, some experts say. Even after Tuesday’s flare-up in fighting, Zelenskyy’s administration made clear that it was not abandoning peace talks with Moscow.

“That is why we are doing everything possible to make this war end. Not to have such news in the morning, to let our soldiers return to their families alive,” Yermak said.

On Feb. 12, 2015, the leaders of France, Germany, Russia, and Ukraine met in the Belarusian capital of Minsk and agreed to a peace deal known as Minsk II. According to the agreement’s terms, an unconditional cease-fire was supposed to go into effect in Ukraine’s eastern Donbas war zone on Feb. 15, 2015.

Fighting never ended. However, Minsk II did freeze the conflict more or less along its current boundaries and banned the positioning of heavy weapons within a buffer zone on either side of the roughly 250-mile-long contact line between Ukrainian and combined Russian-separatist forces.

Additionally, the Minsk II deal required Ukraine to amend its constitution to federalize the country, devolving central authority away from Kyiv in favor of greater autonomy for regional governments. Minsk II also called for elections to be held in the two breakaway territories in the Donbas—territories over which Moscow still enjoys military and political control.

The terms of the Minsk II deal were decidedly unfavorable to Ukraine. Today, many Ukrainians see the constitutional amendment requirements to be a Russian Trojan horse aimed at undermining Ukraine’s pro-Western pivot.

However, with one of the fiercest battles of the war raging in the Ukrainian town of Debaltseve at the time, February of 2015 was a do-or-die moment for Kyiv.

In Debaltseve, Ukrainian forces—a mix of regular army troops and civilian paramilitary units—had at that time been weathering weeks of heavy shelling at the hands of a combined force of Russian regulars and Moscow-backed separatists. It was a classic example of Soviet “area warfare,” in which an enemy is targeted with overwhelming, indiscriminate firepower.

From Kyiv’s perspective, the Debaltseve battle sent a clear message: Either comply with Russian demands at the Minsk cease-fire negotiations or risk a full-scale invasion.

Thus, Petro Poroshenko, Ukraine’s then-president, agreed to Russia’s terms to simply stop the fighting. Yet, the unconditional cease-fire that was supposed to go into effect on Feb. 15, 2015, never materialized.

Under pressure from unabated Russian shelling, Ukrainian forces ultimately abandoned Debaltseve on Feb. 18, 2015. After the Russians took the embattled town and halted their advance, the war then froze along its front lines with only minor territorial changes occuring over the past five years.

Today, neither side is fighting to affect a breakthrough or take significant new ground. Rather, both sides simply go on fighting—weathering daily shelling and sniper fire—to not be the side that backs down first.

“Today’s attack by Russian-led forces near Zolote—which resulted in Ukrainian casualties—comes on the five-year anniversary of Russian-led forces taking the key rail hub of Debaltseve in direct contravention of the terms of the Minsk agreements reached just a week earlier,” Cherith Norman Chalet, acting deputy representative of the U.S. to the United Nations, said Tuesday.

“Then, as now, Russian-led forces continue to contravene commitments made by President Putin and Russian officials, and to kill Ukrainians on Ukrainian territory,” Norman Chalet said.

Up and down the front lines in the Donbas there are still daily exchanges of artillery and small arms gunfire. For those living within the Donbas war zone, war has become a way of life. Children still go to school, even in front-line towns amid the shelling and sniper fire. Families still gather for dinner at night in blacked-out apartments. Outdoor markets still run during the weekends. Life goes on.

“5 years after the establishment of a ‘Package of Measures’ for the Minsk agreements implementation, Ukrainians continue to die as a result of Russian aggression. Russia must cease its aggression and fully meet its Minsk commitments,” the U.S. Embassy in Ukraine wrote Feb. 12 on Twitter.

For years, cease-fire monitors from the Organization for Security and Cooperation in Europe have not monitored the front lines at night due to safety concerns. As a result, the war has adopted a nocturnal routine in which the use of heavy weapons ramps up after the sun goes down and the OSCE cease-fire observers have retired to safe shelters.