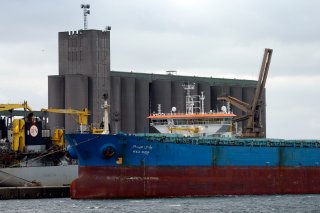 During a phone call with Turkish president Recep Tayyip Erdogan on Tuesday, Russian leader Vladimir Putin indicated that his government would consider resuming its participation in a Turkish and United Nations (UN) mediated agreement allowing Ukraine to export its grain through the Russian-controlled Black Sea. Putin, however, insisted that Moscow required “real guarantees” from Kyiv that the shipping lane would not be used for military purposes amid the two countries’ ongoing war.

The call on Tuesday came after Russia announced over the weekend that it would no longer allow Ukrainian ships to pass through the Black Sea. In a statement declaring the change in policy, Kremlin spokesman Dmitry Peskov claimed that a drone attack against the Russian Black Sea Fleet in Sevastopol had been launched from the shipping corridor, leading Russia to close it. Ukrainian officials denied Peskov’s allegations, insisted that they had only used the corridor for civilian grain exports, and countered that Russia had planned to shut the corridor off for weeks in retaliation for Ukrainian successes on the battlefield.

“It is imperative to conduct a detailed investigation into the circumstances of this incident and have [Kyiv] provide real guarantees of strict compliance with the [Turkish-mediated agreement], in particular, of not using the humanitarian corridor for military purposes,” Putin said, according to a readout of the two leaders’ discussion released by the Kremlin. “Only then will it be possible to review the resumption of work within this Black Sea Initiative.”

The grain export deal, negotiated in Istanbul and signed by both Russian and Ukrainian officials in July, provides for the export of Ukrainian grain from three of the country’s remaining ports via a safe corridor. As part of the agreement, all of the ships are required to undergo Russian inspection to prevent potential arms smuggling. Prior to the Russian withdrawal, the deal was scheduled to expire on November 19, pending a renewal.

Putin also expressed frustration with Erdogan over the West’s failure to allow Russia to export agricultural products, including grain and fertilizer, through its territory. While most Russian agricultural products are not subject to Western sanctions as oil and gas are, Russia relies on pipelines to transport certain products through Ukraine and access to ports on the Baltic Sea which have remained locked off since its invasion of Ukraine in February.

The agreement between Russia and Ukraine was framed as a humanitarian measure intended to lower grain prices and prevent famine in the developing world. At least nine million tons of grain have been shipped through the Black Sea since the agreement took effect. Although comparatively little of it was directed toward nations at risk of famine, the increase in supply helped to decrease global prices and make it easier to import.