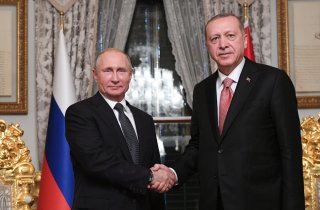 Russian president Vladimir Putin is set to meet his Turkish and Iranian counterparts in what will be his second foreign trip since Russia invaded Ukraine on February 24.

The Kremlin announced on Monday that Putin will attend a trilateral summit with Turkish president Recep Tayyip Erdoğan and Iranian president Ibrahim Raisi in Tehran next Tuesday. Moscow officials said the three leaders will discuss issues related to Syria. Russia and Iran have acted as key military and political allies of embattled Syrian president Bashar al-Assad, while Turkey has backed the Free Syrian Army and other anti-government factions. Turkey has conducted at least three large-scale military operations in Syria since the country became embroiled in a civil war in 2011, with Turkish and Turkish-aligned anti-government forces currently occupying swathes of northern Syria.

The meeting marks Putin’s second foreign trip since the Russo-Ukrainian War began; the Russian leader embarked on a one-day visit to Dushanbe for talks with his Tajik counterpart, Emomali Rahmon, in late July. Kremlin spokesman Dmitry Peskov confirmed that Putin will meet with Erdogan separately prior to the summit. Ankara has emerged as a key mediator between Russia and Ukraine, hosting a series of bilateral talks between Russian and Ukrainian delegations over the course of March that ultimately failed to produce a peace settlement.

Turkey is involved in ongoing talks with Russia and the United Nations to establish a commercial corridor out of Ukraine’s Black Sea coast to ensure unimpeded grain exports out of the country. Erdogan said earlier in July that Russia and Ukraine are just days away from ironing out a grain export deal, but Kyiv officials have expressed skepticism that an agreement will be reached anytime soon. “We are just about a few steps from the deal, but these steps are the most difficult,” Ukraine’s foreign minister, Dmytro Kuleba, said in an interview, according to Bloomberg. “I don’t want to join the chorus of those who say the agreement will take place next week.”

The summit comes shortly on the heels of claims by the White House that Russia is asking Iran for hundreds of military unmanned aerial vehicles (UAVs). “Our information indicates that the Iranian government is preparing to provide Russia with up to several hundred UAVs, including weapons-capable UAVs on an expedited timeline,” National Security Advisor Jake Sullivan told reporters on Monday. Iranian Foreign Ministry spokesperson Nasser Kanaani told Newsweek there have been no recent arrangements between Tehran and Moscow regarding drone transfers. "Cooperation between the Islamic Republic of Iran and the Russian Federation dates back to before the onset of the Ukraine war and no specific development came about recently in this regard," Kanaani claimed.