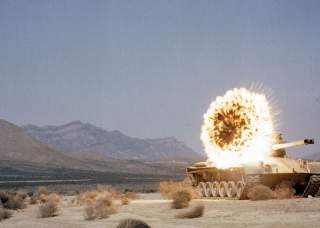 A Russian company is developing a new smart artillery shell.

“Once out of the artillery barrel the new shell will follow an ordinary ballistic flight path most of the time,” TASS said. “Near the target, the built-in control system will be activated to correct the trajectory.”

To adjust the shell's trajectory, options include fins or jet thrusters. “Kochkin remarked that equipping artillery shells with such control systems would be a rather tricky task due to the high dynamic impacts the shell is subject to at the moment of firing, in the process of rotation inside the artillery barrel and in flight.”

Guided artillery shells date back to the 1980s, when the U.S. Army developed the M172 Copperhead, a 155-millimeter shell that homes in a target illuminated by a laser designator. Copperheads were used against Iraqi targets in 1991 and 2003, and this year the Lebanese army used them to destroy ISIS emplacements. The Soviet Union followed in 1986 with its own laser-guided shell, the 152-millimeter 2K25 Krasnopol.

In the early 2000s, the U.S. developed the M982 Excalibur 155-millimeter shell, which uses GPS guidance and has a range of 25 miles. In June 2018, the Army awarded a $93.7 million contract to Raytheon for hundreds of additional Excaliburs, for which a laser-guided version is also being developed. Raytheon has also devised a laser-guided version for the 5-inch guns on U.S. Navy warships, which offers triple the range of conventional naval shells.

Laser-guided weapons require someone near the target to illuminate it with a laser beam for the weapon to lock on to, while GPS-guided bombs use satellite signals that can be jammed. But Russia might be taking a different approach. Kochkin hinted that the new Russian shell might use an optical guidance system. “At high rotation speeds, up to 30,000 rounds per minute, optical instruments are useless,” he told Tass. “The image is blurry.”

But then he added, “solving this problem will be a rather tricky task.”

It’s not clear whether Kochkin was speaking of a self-guided artillery shell (a shell traveling a thousand miles an hour would be tough to control for a human with a joystick). However, Kochkin emphasized the new shell would be cheaper than other guided munitions such as Krasnopol. America's Excalibur costs about $68,000 per round, compared to normal artillery shells which cost about $1,000 a round.

“They will be cheaper than guided shells of the Krasnopol type, but more expensive than ordinary shells,” said Kochkin, deputy CEO of Rostec’s Techmash affiliate. The Russian government hasn’t provided any funding for the project, so Techmash is pursuing it as an internal development project.

Soviet troops in Afghanistan did use a laser-guided 152-millimeter shell in Afghanistan, according to TASS. “The shell flew most of the distance to the target as an ordinary artillery ammunition piece. The homing system was activated 600 meters [656 yards] away from the target, spotted by the laser target finder. The shell’s trajectory was fine-tuned with impulse thrusters.”