Qassem Soleimani Statue Destroyed in Iran on Anniversary of Killing 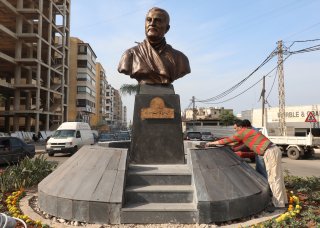 A statue of Gen. Qassem Soleimani, the commander of the Quds Force division of Iran’s Islamic Revolutionary Guard Corps (IRGC), was burned to cinders by an unidentified arsonist in the Iranian city of Shahr-e Kord, according to Iranian state media.

The statue had only been in place for less than twenty-four hours. It was unveiled on Wednesday morning to commemorate the second anniversary of Soleimani’s killing in a controversial U.S. airstrike at the Baghdad International Airport on January 3, 2020. The administration of former President Donald Trump justified the strike on the basis that Soleimani was involved in planning a terror attack against U.S. forces in Iraq and was therefore a “legitimate military target.”

Iran described Soleimani’s killing as an “act of war” and began to mobilize for an escalation against U.S. forces. However, popular anger against the United States within Iran was quickly redirected against the Iranian government after it accidentally shot down a civilian airliner that its military mistakenly identified as a cruise missile. Although a wider conflict between the United States and Iran ultimately did not materialize, Iranian forces and Iranian-backed militias throughout the Middle East commemorated the second anniversary of Soleimani’s death by promising retribution against the United States. In addition, two armed drones approached the U.S. Embassy in Baghdad and were shot down on Tuesday.

Mohammad Ali Nekounam, a representative for Iranian Supreme Leader Ali Khamenei, harshly criticized the arson attack and noted the parallels between the destruction of the statue and Soleimani’s death. Nekounam described the attack as a “crime in the dark of night … like the same crime in Baghdad airport,” and claimed that it was “at the height of cowardice.”

The statue was estimated to have cost roughly $35,000, according to local sources. The statue burned in Shahr-e Kord was part of a series of similar depictions of the deceased general. In fact, at least one other statue from the series has been burned down.

Prior to his death, Soleimani had been widely acknowledged for his strategic prowess and his ability to build relationships with allied forces in the Middle East, a primary objective of the Quds Force. Because of his reputation, he was lauded as a national hero by the regime and attacked as a symbol of a government that has been embattled by a series of popular protests since 2017.