Qassem Soleimani: Who Is He and What Is the Quds Force? 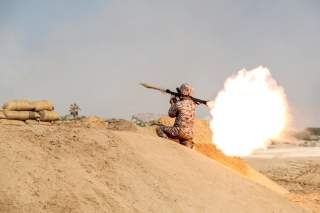 The Pentagon has confirmed that Iran’s top general was killed by a U.S. drone strike on Thursday night. What does it mean for the balance of power in the Middle East, and what happens next?

From “designated terrorist leading designated a terrorist organization” to "living martyr of the revolution", Qassem Soleimani has been assigned numerous labels over the past twenty-four hours. “Easily replaceable” is not one of them.

As the head of the Quds Force, an unconventional warfare unit responsible for the foreign operations of Iran’s Islamic Revolutionary Guard Corps (IRGC), Soleimani has emerged over the past several years as a seminal figure in the ongoing proxy conflict between Washington and Tehran. For an Iranian military that lacks the conventional resources to challenge the U.S. in an open confrontation, the Quds Force has proven itself as an invaluable weapon of asymmetric Iranian warfare against U.S. interests in the Middle East. From recruiting and training Islamic militants to attack U.S. assets in Iraq, Afghanistan, and Syria, to plotting several high-profile terrorist attacks and launching increasingly brazen offensives against U.S. allies in the region, the Quds Force has been a consistent thorn in Washington’s side, undermining American interests in the Middle East in ways that Tehran’s conventional arsenal never could.

At the speartip of these efforts stood Soleimani, widely recognized as a uniquely effective operator whose relentless efforts over the past several decades have honed the Quds Force into the powerful unconventional warfare apparatus that it is today. The Iranian General has accrued a prodigious portfolio of bombings, cruise missile attacks, and assassinations across the Middle East, with the Pentagon attributing a staggering 17% of U.S. personnel deaths to operations orchestrated by Soleimani. No less important than his many successful combat operations, Soleimani was described the centrifugal force behind Iran’s vast military intelligence network.

Given his indispensable role in Iran’s security establishment, there is little debate that the loss of Soleimani is a major blow to Iran’s ability to project paramilitary power across the Middle East. The IRGC will no doubt carry on, but their capacity to plan and execute the types of bold, ambitious operations that have become a hallmark of the Quds Force under Soleimani’s leadership has been greatly depleted. With the assassination of Soleimani, the razor-sharp sword of Iranian asymmetrical warfare has been considerably blunted.

In a vacuum, the killing of Soleimani offers several benefits. The U.S. has not only thwarted what the White House described as Soleimani’s imminent terror plot against U.S. citizens, but arguably secured a stronger long-term military position in the Middle East-- there are, however, any number of uncontrollable variables that portend unforeseen consequences. The first and most immediate of these is Iran’s response. In a statement widely echoed by members of his cabinet and the Iranian National Security Council, President Hassan Rouhani has vowed that "The great nation of Iran will take revenge for this heinous crime." It remains to be seen, however, whether or not Iran’s promised “forceful revenge” will unfold within diplomatic, military, or cyber parameters that the White House and Pentagon deem acceptable.

Another, less-discussed but no less crucial variable are potential responses from other regional actors; the prospect of an Iraqi Parliament vote to eject the U.S. military presence from within their borders grows ever more likely, while some defense commentators have raised concerns over retaliatory attacks against Saudi oil fields. The Pentagon and State Department appear to be bracing for violent Shia uprisings across the Middle-East, which not only poses an immediate risk to local U.S. military and diplomatic assets, but may destabilize U.S.-aligned governments in the Middle East.