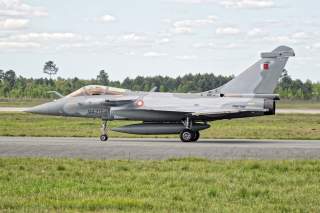 Noteworthy along with the Rafales, QEAF ordered 24 Eurofighter Typhoons and 36 Boeing F-15QAs.

On Feb. 6, 2019, a ceremony hosted by Eric Trappier, Dassault Aviation Chairman and Chief Executive Officer, was held in Merignac facility for the delivery of the first Rafale to the Qatari Emiri Air Force (QEAF), under the patronage of His Excellency Dr Khalid bin Mohamed Al Attiyah, Qatari Deputy Prime Minister and Minister of State for Defense Affairs, and Geneviève Darrieussecq, French State Secretary to the Minister of Armed Forces, and in the presence of Qatar Emiri Air Force Commander, Major General Mubarak Al Khayareen.

According to the company news release, the first Rafale delivery, on schedule, comes after the signature in May 2015 of the contract for the acquisition by the State of Qatar of 24 Rafale fighters to equip its Air Force, and an additional 12, in December 2017, for a total of 36 aircraft to fly under the Qatari colors.

In the frame of this contract, a large group of Qatari pilots as well as technicians are being trained in France both by the French Air Force and the French Industry.

The very high level of the guests attending that ceremony reflects the importance of the historic and strategic partnership between Qatar, France and Dassault Aviation, and the Rafale, following on from the Mirage F1, the Alpha Jet and the Mirage 2000, will carry out the tradition and will contribute to secure the sovereignty of the state of Qatar.

“For the fourth time in our long and trustful partnership with Qatar, a Dassault Aviation aircraft will serve proudly in the Qatari Emiri Air Force. This first delivery is the culmination of a relationship started more than 40 years ago and I am very pleased and grateful that once again the State of Qatar, has renewed its confidence in our dedication and confirmed not once, but twice, the choice of the Rafale to protect its land and people”, declared Eric Trappier, Chairman and CEO of Dassault Aviation.

Noteworthy along with the Rafales, QEAF ordered 24 Eurofighter Typhoons and 36 Boeing F-15QAs. The QEAF has a requirement for 72 new combat aircraft to replace its aging fleet of 12 Dassault Mirage 2000-5 fighters. If the orders are fulfilled in full, the QEAF will field a fighter force of 96 platforms across three different types.

For some years, Qatar has been building up its combat aviation capabilities with the procurement of the latest platforms and technologies. The increase in the QEAF’s frontline fighter force from the current 12 aircraft to upwards of 96, in particular, will represent a massive enhancement in its capacity and capability.