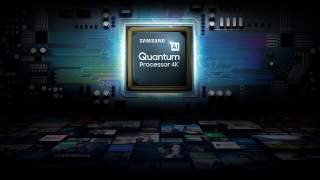 Over the past several years, all of the big players in the high-end TV market have aggressively consolidated around OLED panel technology--all, with the exception of Samsung. The South Korean tech giant has gone all-in on their proprietary QLED technology, which they claim works and looks better than its OLED counterpart. But what exactly is QLED, and how does it stack up against the competition? Here is everything you need to know.

QLED --or Quantum Light-Emitting Diode--technology is not new, making its consumer appearance as early as 2013 in Sony’s high-end TV lineup. Samsung itself has tinkered with the QLED concept since 2015, before debuting their first QLED lineup in 2017. In its current implementation, a QLED display combines a layer of metallic quantum dots with a regular backlit LED panel. These nano-sized dots are individually capable of producing accurate and extremely bright colors, which boosts contrast levels and color reproduction far beyond what can be achieved by a traditional LED TV. QLED’s chief selling point is a much brighter and more vibrant image, but it has a few other tricks up its sleeve: Full Array Local Dimming (FALD) to depict more convincing dark scenes, and an ambient mode suite to help your TV blend into your living room.

QLED still emits light in more or less the same way that a regular LED television does--in that sense, Samsung’s QLED lineup should be seen less as a fundamentally different kind of panel technology, and more as a proprietary, highly advanced LED TV variant. But that should matter little to the end consumer--what’s important is that QLED TV’s have proven themselves more than capable of delivering superb image quality.

The more pressing question is how QLED compares with its foremost rival, OLED. It would have been easy to declare a winner in 2017, when QLED was still suffering from significant growing pains, but there is no longer a clear front-runner in 2020. Instead, it’s more a question of trade-offs and individual preferences. If you’re buying a television to watch in a dark or dimly-lit room, you’ll generally find that OLED panels offer marginally better contrast, superior viewing angles, and access to true blacks. But the situation changes dramatically in well-lit rooms, where the unparalleled brightness and vibrancy of QLED displays makes Samsung a strong contender.

Then there’s the question of burn-in, or permanent screen damage caused from staying too long on the same image. Whether you’re monitoring the news or watching the stock market, there are some people-- including a few of us at The National Interest-- who keep their television running on the same channel for most of the day. QLED owners can do so with total peace of mind, whereas OLED panels are potentially susceptible to burn-in.

Surprisingly, price could be another reason to opt for QLED. To be clear, neither panel type qualifies as cheap-- QLED, however, can be found in a larger price range than OLED. It remains impossible to buy an OLED TV at or below $1,000, but Samsung’s midrange Q60R line currently offers several sub $1000 QLED options starting from an impressive $600.

What’s next for QLED? With manufacturers TCL and Hisense joining the QLED fray as part of Samsung’s “QLED Alliance,” many more affordable QLED models can be expected over the coming years. Meanwhile, Samsung’s ongoing research into  “self-emissive” QLED displays that use quantum dots as an independent light source could bridge the contrast gap between OLED and QLED by giving the latter access to true blacks, as well as better viewing angles.