The Queen and the Curse of the Diamond 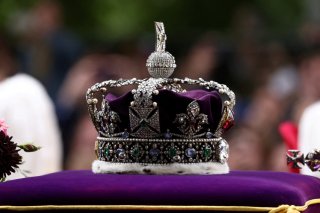 It is of little wonder that England’s queens were reluctant to own the world’s most famous and expensive diamond. The story of the Koh I Noor diamond, which sits in the cross of the Crown of Queen Elizabeth, and was displayed majestically at Queen Elizabeth II’s funeral, would make Raiders of the Lost Ark appear like a dull black and white B movie. But the life of the Koh I Noor has more than a science fiction narrative. It seems to embody the rise and fall of empire, the clash of Occident and Orient, and the importance of the reliquary. Diamonds are inset as part of shrines or crowns and have been since antiquity, for example, in the shrines of saints in the cathedrals of Europe. For the ancients, time was cyclical; it was not the linear progression of the moderns. Therefore, time was seen as past, present, and future unseparated. The idea of diamonds and reliquary shrines represented much more than an ephemeral gift or bestowment. They also related the idea of divine authority and that the right to monarchy was ordained by God and embedded in the reliquary. With the Koh I Noor this divine element became one of mystery and superstition. To look into the Koh I Noor was said to be revelatory and for some, it seemed like a timeless black hole, for others it was full of life like an eternity of galaxies. It is this maddening ambiguity, combined with its apparent curse, which has so drawn people throughout its history.

The origins of the diamond are wrapped in mystery. Its earliest reference is in the Vishnu Purana of ancient Hindu texts where the diamond is known as the Syamantaka diamond. In this epic, Krishna battled a bear for thirty days to get the diamond. However, the first recorded appearance of the Koh I Noor is in 1739 when the Persian Nader Shah invaded and took the famous Peacock Throne of the Mughal emperors, the greatest treasure of the Mughal Empire. It cost twice the price of the construction of the Taj Mahal. Originally built by Shah Jahan, the Peacock Throne, an Indian reliquary encrusted with gold and diamonds, contained two noteworthy stones. The first was the Timur Ruby, which also became part of the Crown Jewels, and the Koh I Noor, in Persian. The stones were said to be part of the Caravan of loot that made its way back to Persia, carried by eight hundred elephants, four thousand camels, and fifteen thousand horses. When Nader Shah first stared into the Koh I Noor he exclaimed “Mountain of Light!” A courtesan noted that “If a strong man were to throw four stones—one north, one south, one east, one west, and a fifth stone up into the air—and if the space between them were to be filled with gold, all would not equal the value of the Koh-I-Noor.” According to legend, the Persian court became transfixed on the diamond, it was said to give its owner eternal life and riches, a kind of Faustian bargain. It appeared to be changing, however, to be emitting ungodly powers.

In a coup d’état initiated in 1747 by his nephew Adil Shah, a kind of Macbethian character, Nader Shah was assassinated. On his deathbed, he refused to disclose the whereabouts of the diamond (although he had lost his tongue through torture at that stage). Adil Shah decided to put to death all sons and grandsons of the shah except one: a grandson of Nader Shah, Shah Rukh. He also refused to talk and, in the spirit of extravagant Persian assassinations, he had molten gold poured over his face. However, even before the molten metal had hardened, mask-like, on the ill-fated young shah, an agent was smuggling the Koh I Noor to Afghanistan, to Amir Shah Durrani.

Now the Koh I Noor was reputed to give eternal riches to those who owned it. Yet it had begun devouring its owners; just like the tumor which ate away Shah Durrani’s face, destroyed his good looks, and his entourage of mistresses. His valet noted that, in later life, he would spend evenings talking to the Koh I Noor asking for forgiveness and for his life back. He died in 1772 and the diamond fell to Shah Shuja who had been in a tussle with his brother for the title of King of Afghanistan. There was a law in Afghanistan that forbade blind men from assuming the throne so Shah Shuja, a kind of Machiavellian character, had his brother’s eyes gouged out by hot needles. He was known for his brutality with his courtesans and slaves. He would remove tongues, testicles, penises, ears, and noses for the slightest infringement or misdemeanor. An American traveler, Josiah Harlan, who stayed with the shah’s court, noted that all of his courtiers and slaves were missing bodily parts. He described an “earless assemblage of mutes and eunuchs.” The amir was in a difficult position as the Russians posed a threat from the north. After being deposed in 1809 he fled to India and, for the price of Ranjit Singh’s hospitality, gave up the Koh I Noor. Ranjit Singh was the binding force of the great Sikh Empire which unified the Punjab region amidst warring factions and, luckily for a man of this regional diaspora, died peacefully in his sleep in 1839.

The diamond now passed, through the usual court assassinations, intrigue, and amputations, to the five-year-old emperor, Duleep Singh. The elder Singh’s flirtations with the British were to prove costly and the Second Sikh War concluded in 1849 meant that all the Maharajah’s property, including the diamond, were ceded to the British. Duleep Singh, aged eleven, signed the Treaty of Lahore and handed over his father’s kingdom and the world’s most illustrious diamond to the British. Queen Victoria, however, had heard rumors of the mysterious diamond and refused to countenance it. She was nevertheless assuaged by other rumors that the diamond was destined to end in the hands of a woman and that it would bring only prosperity and health. The majestic stone now sits quietly in the Crown of Queen Elizabeth II. Duleep Singh was extradited to England and received a pension of 25,000 pounds a year. He ended his days in the Suffolk village of Elveden with a population of 270. The population of Ranjit Singh’s Punjab was 10 million. The history of the diamond may confirm therefore the affinity of the stone with women and why it tormented its male owners. It became an obsession for Duleep who campaigned ceaselessly for its return to him and India, so much so that he connived with the Russians asking them to invade Punjab.

The reliquary of the diamond now sits with the late Queen Elizabeth II. The Koh I Noor has now passed to Camilla as Queen Consort, wife of King Charles III. Yet the coveted diamond is still producing fury as India and Afghanistan lay claim to its ownership. However, it is the representation of the Koh I Noor that has become its most important aspect: that of conquest. Conquest and bounty were the features of the British victory in the Sikh Wars. The restored French monarchy owned the 140-carat Pitt diamond, the Russians had the 190-carat Orlov diamond, and now the 186 carats Koh I Noor became part of the imperial luster of the British monarchy and its sustenance. Later in life, Duleep Singh described the Queen as “Mrs. Fagan.” And it is with this Janus-faced aspect, the good and evil, the British and Indian, the reliquary and also lost treasure, that draws people to its ambivalence and its power to mesmerize. Perhaps Camilla is not familiar with its history but I would advise her to avail herself of a good surgeon, just in case.

Brian Patrick Bolger studied at the London School of Economics. He has taught political philosophy and applied linguistics in Universities across Europe. His articles have appeared in The Montreal Review, The European Conservative, The Salisbury Review, The Village, New English Review, The Burkean, The Daily Globe, American Thinker, and Philosophy Now. His new book, Coronavirus and the Strange Death of Truth, is now available in the United Kingdom and United States. He can be reached at [email protected].