The Queen Elizabeth Class Battleships Were Among the Best Ever Built. What If They Never Happened? 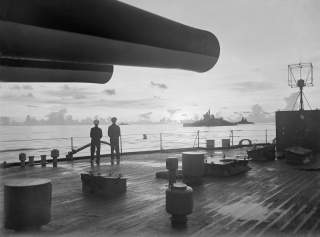 The five super-dreadnoughts of the Queen Elizabeth class were among the finest battleships ever built. Combining high speed with heavy armament, the ships made critical contributions to the defense of the United Kingdom in both the First and Second World Wars. Queen Elizabeth, Barham, Malaya, Warspite, and Valiant served in battles as varied as the attempt to force the Dardanelles, the Battle of Jutland, the Battle of Cape Matapan, and the final offensives against Japan in the Pacific.

But what if the Queen Elizabeths had never seen service? What if the Admiralty had gone with less risky, more evolutionary designs?

Laid down in 1912, the Queen Elizabeth class battleships represented a revolutionary leap over previous designs, almost as distinct from their immediate predecessors as HMS Dreadnought had been from hers. At full load, they were nearly a third larger than the superdreadnoughts of the Iron Duke class. Their armament took advantage of this increase in size; each of the Queen Elizabeths carried eight 15” guns in four twin turrets, as opposed to the ten 13.5” guns of the Iron Dukes. The 15”/42 gun carried by the battleships was itself experimental, having seen relatively little testing before selection, but fortunately proved to be a remarkably effective weapon.

The propulsion was just as revolutionary. While the Queen Elizabeths never achieved the 25-knot speed promised by their architects, they could maintain a speed some 2-3 knots faster than the rest of line of battle, playing an intermediate role between the battlecruiser fleet and the main battle fleet. More importantly, the Queen Elizabeths were powered solely by oil, which enabled them to reduce crew and to maintain their high speed for longer durations.

These advantages made the ships particularly devastating in the First World War, where they made up a squadron that participated in the Battle of Jutland. At Jutland, they absorbed, and inflicted, enormous damage without suffering permanent loss. All five ships were retained under the terms of the Washington and London Naval treaties, and in the Second World War, their extra speed gave them an edge over foreign competitors of similar vintage, allowing them to keep up with task forces that included aircraft carriers and fast battleships. The ships remained in service until the end of the war, losing only one of their number, the HMS Barham, to U-boat attack.

How Things Could Have Gone Wrong

Nevertheless, for all of these reasons the Queen Elizabeths were fundamentally experimental ships. Winston Churchill fought hard for each aspect of the class, but faced opposition from critics who supported more conservative, evolutionary designs. The 15" gun could have gone wrong, as could the oil-firing scheme. Alternative paths would have been an incremental improvement to a 14" gun (which the British had installed on battleships intended for the Chilean and Japanese navies), or possibly even a shift to triple turrets, which the U.S. Navy had adopted but which the Royal Navy (RN) would not use until the early 1920s. Most of these options would have been less ideal than the eventual decision to build the QEs, but would also have represented less risk on such a massive state investment.

Even after construction, events might have gone terribly wrong. At the Battle of Jutland, the Queen Elizabeths status as an intermediate speed squadron left them briefly at the mercy of the entire German line-of-battle. Malaya suffered a fire during the battle, and Warspite endured a rudder malfunction that drew her under the fire of the German line a second time. The Royal Navy could easily have lost one or more of the ships, with serious downstream effects for its force structure.

Had the Royal Navy simply built upon the Iron Duke class, it might have opted for a group of ships not terribly dissimilar from HMS Canada, which on a slightly larger displacement carried a slightly heavier armament (ten 14” guns) and could make a slightly higher speed (22.5 knots). This would have resulted in an identifiable, if incremental, improvement on existing ships. Another alternative to the Queen Elizabeth class came in the form of the “R” (or “Revenge”) class battleships which began to come into service in 1916. Slightly scaled down versions of the QEs, the Rs (Revenge, Ramillies, Royal Oak, Royal Sovereign, and Resolution) carried the same main armament, but had a machinery plant more in keeping with previous classes of super-dreadnoughts. Unfortunately, the R class had certain stability characteristics that made it extremely difficult to refit and modernize them.

Either way, the Royal Navy likely would have felt the need for additional battlecruisers to support the fleet. The speed (even if exaggerated) of the QEs allowed the RN to skip a mini-generation of battlecruisers before returning to form with HMS Repulse and HMS Renown. Indeed, the RN originally intended to build the fourth ship as a battlecruiser. Such a vessel would likely have been very similar to the Japanese Kongo (a 30000-ton ship carrying eight 14" guns, capable of thirty knots).

In service, the alternative super-dreadnoughts (whether or the Revenge type or the Canada-type) would have been perfectly adequate for the needs of the Grand Fleet in World War I, and utterly insufficient to the demands of World War II. Any additional battlecruisers, however, had they survived the Battle of Jutland, could have turned in creditable service in the Second World War. On balance, however, the RN likely would have missed the unique contribution that the Queen Elizabeths could offer, especially with regards to their combination of speed and power.

Almost any scheme for the replacement of the Queen Elizabeths, apart possibly from the construction of a squadron of fast battleships along the lines of HMS Hood, would have left the Royal Navy with fewer options and a less capable force in both World War I and World War II. Their absence likely would not have made a decisive difference in either conflict, but especially in the Second World War would have left the RN short of effective ships in the Mediterranean, and elsewhere.

Robert Farley, a frequent contributor to TNI, is a Visiting Professor at the United States Army War College. The views expressed are those of the author and do not necessarily reflect the official policy or position of the Department of the Army, Department of Defense, the Army War College, or the U.S. Government.