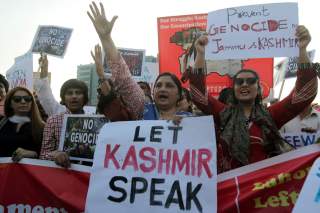 If the CIA is watching India and Pakistan now, it will have to do better than it did in 1998.

In 1998, the CIA subjected India to strict surveillance to ensure it was complying with its commitment not to test nuclear weapons. The agency used satellites, communications intercepts and agents to watch the nuclear facility at Pokhran in Rajasthan state. India could not detonate warheads, which would inevitably lead Pakistan to follow suit, without the United States knowing in advance. Or so the United States thought.

Washington went into shock on May 11, 1998, when Indian Prime Minister Atal Bihari Vajpayee announced that his country had just detonated not one, but five nuclear warheads at Pokhran. "India is now a nuclear power state," Vajpayee declared. R. Jeffrey Smith reported two days later in The Washington Post that CIA analysts responsible for monitoring India’s nuclear program "had not expected the tests and were not on alert, several officials said. They were, according to one senior official, asleep at their homes and did not see the (satellite) pictures until they arrived at work in the morning." U.S. Sen. Richard Shelby called the negligence "the biggest failure of our intelligence-gathering agencies in the past 10 years or more."

Pakistan responded by testing five of its nuclear bombs on May 28. Pandora’s box was wide open, threatening mass destruction to the Asian subcontinent if the Pakistani and Indian armies squared off along the Line of Control that separated their forces in the disputed region of Jammu and Kashmir. That happened a year later when Pakistani paramilitaries masquerading as indigenous Kashmiri rebel jihadists penetrated the Line of Control in Kashmir’s Kargil region. The Indian army confronted them, and U.S. intelligence detected Pakistan moving tactical nuclear weapons onto the battlefield. American diplomat Bruce Reidel wrote in his informative book, Avoiding Armageddon: America, India, and Pakistan to the Brink and Back, "The last war that India and Pakistan fought, over Kargil, threated to expand to a nuclear conflict." It didn’t go nuclear, following U.S. President Bill Clinton’s demand that Pakistani Prime Minister Nawaz Sharif withdraw his forces. It was a close call.

A Matter of International Concern

If the CIA is watching India and Pakistan now, it will have to do better than it did in 1998. In 2019, with passions high over India’s abrogation of Kashmir’s legal, if fictitious, autonomy, the outcome would not be waking up to discover one side or the other had tested weapons. It would be the sight of nuclear war taking millions of lives. Although the stakes in Kashmir could not be higher, the United States and much of the international community call the dispute India’s "internal affair" or a "bilateral" issue between India and Pakistan. It isn’t. A potential nuclear conflagration cannot be anything other than a matter of international peace and security. The Indian and Pakistani armed forces possess both strategic and tactical nuclear weapons, which local commanders could use on the battlefield in populated areas. This would be the first use in war of atomic weapons since the U.S. destruction of Hiroshima and Nagasaki in 1945.

The possibility of the conflict going nuclear may have increased on Aug. 16 when Indian Defense Minister Rajnath Singh seemed to abandon India’s "no first use" doctrine when he tweeted that "India has strictly adhered to this doctrine. What happens in the future depends on the circumstances." The circumstances are not hopeful. Correspondents for The New York Times in Kashmir reported meeting a herdsman beside his flock in the Kashmiri capital, Srinigar:

As a car carrying a reporter slowed down to approach him, he sprang up and jogged to the window.

"We are ready to pick up guns," he said, unprompted.

If the decadeslong armed rebellion in Kashmir grows more intense in response to India’s revocation of the region’s autonomy and its imposition of a total security lockdown, India will blame Pakistan, which in years past supported Kashmiri insurgents. Imran Khan, who became Pakistan’s prime minister in August 2018, was not involved in his predecessors’ interference in Indian-controlled Kashmir.

Following Modi's clampdown in Kashmir, Khan has sought mediation support from U.S. President Donald Trump (who had offered to mediate when he met Khan at the White House in July), the United Nations, fellow Muslim leaders and countries that might influence Indian Prime Minister Narendra Modi. His pleas, he recently told me over the telephone, fell on deaf ears. His problem is how to avoid war while defending the people of Kashmir, who are overwhelmingly Muslim in India’s only Muslim-majority state. Muslims throughout India, who have been subjected to new tests to prove their right to citizenship, are living in fear of Modi’s Hindu nationalist government.

India and Pakistan came to blows last February, following an insurgent attack on Indian troops in Kashmir. The Pakistanis downed an Indian fighter jet and captured its pilot, Abhinandan Varthaman. When Khan returned the Indian pilot on March 1, Modi did not acknowledge his conciliatory gesture. Nor has his government been willing to discuss Kashmir, whose people were promised a plebiscite on their future by India’s first prime minister, Jawaharlal Nehru, in 1947. The vote never took place, but several wars have. The question is, what do the people of Kashmir — those in the Indian-held two-thirds of the region, the Pakistani-held western third and the Hindu Kashmiris who were expelled from their homes in 1947 and are still officially displaced — want? No one is asking them, but that may be the only way to save them, and the world, from nuclear war.

The Question That Never Gets Asked About Kashmir is republished with the permission of Stratfor Worldview, a geopolitical intelligence and advisory firm.