Question for President Trump: Can the U.S. Economy Still Grow at 3%? 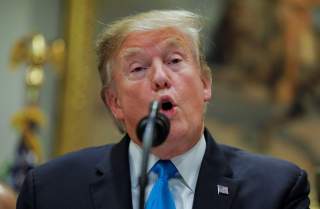 Given Wall Street whispers of a very European 1-handle for second-quarter GDP growth, the Trump White House might well have been pleased with the (preliminary) 2.1% number. Although the economy slowed from Q1’s 3.1% pace, it was “a better-than-anticipated outcome,” according to JPMorgan. Thanks, American consumer! And thanks American taxpayer, too, since solid government spending also helped.

But no thanks to American business, whose capital spending contracted by 0.6%. Another sign, perhaps, that the Trump trade war is offsetting the Trump tax cuts. (At least that’s JPMorgan’s theory.) While it’s good that the record-long economic expansion continues to roll in year ten, one led by consumer/government spending rather than business investment is not the boom you’re looking for.

And maybe “boomlet” rather than “boom.” Turns out that 2018 economic growth didn’t hit the Trump administration’s 2018 target of 3% or better after all, according to revised government data. Measured from fourth quarter of 2018 to a year earlier, GDP growth came in at 2.5%. Even an alternate measure ⁠— total output for 2018 vs. total output for 2017 ⁠— shows growth fell just a bit short, increasing 2.9%. Yet as The Wall Street Journal points out, that figure “marks the strongest yearly pace of growth since 2015.”

Now as I’ve repeatedly pointed out, 3% is an ambitious growth target ⁠— much less 4% or 5% ⁠— given demographics and chronically weak productivity growth. The business tax cuts were supposed to help the latter by boosting business investment. But obviously that theory didn’t really play out in Q2, and a reasonable interpretation of that data over the past year and a half would be that the promised investment surge is mildly disappointing — at least so far.

Again from JPM: “Bigger picture, the economy looks like it’s slowing from the fiscal-stimulus supported pace recorded last year, though that slowdown is not happening in an overly abrupt or worrisome manner.” Along the same lines, Goldman Sachs is currently looking for Q3 growth of 1.7%.

Who stole the 3% economy? Certainly the president has his own theory, as outlined on Twitter: “Q2 GDP Up 2.1% Not bad considering we have the very heavy weight of the Federal Reserve anchor wrapped around our neck. Almost no inflation. USA is set to Zoom!” But there are other opinions, such as this one from Capital Economics: “Rather than acknowledging that the tax cuts didn’t super-charge growth, we suspect the Trump administration will continue to try and pin the blame on the Fed instead.”