The RAF Came Close to Adopting the F-14 Tomcat. What Happened? 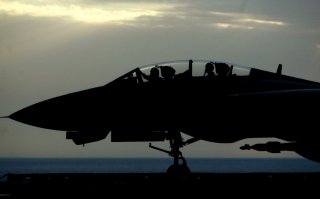 In its operational history, only two countries have ever used the F-14 Tomcat: the United States, which saw extensive use of the aircraft in the Vietnam War, and Iran, where Shah Mohammed Reza Pahlavi bought the planes in the 1970s and Ayatollah Khomeini’s forces used them to great effect against Iraq in the following decade. Partly due to its incredible versatility, and partly due to its inability to buy anything else, Iran has continued to operate the F-14s, well past the end of their operational life in the United States.

That the plane’s usage should be limited to America and America’s largest adversary is a curious twist of fate. However, the U.S. inability to export the F-14 was by no means inevitable. Many countries, including Israel and Japan, expressed interest in purchasing the Tomcat, before mostly choosing the single-seat F-15 Eagle instead.

One interesting historical footnote is that the plane nearly saw service with the Royal Air Force (RAF). In the mid-1970s, Britain faced a serious budget headache after costs for the planned Tornado Air Defence Variant (ADV) skyrocketed. At the same time, Britain’s air fleet shrank to less than 100 serviceable aircraft, leading to accusations that the country’s defenses were unprepared for war. “The few have never been fewer,” one British newspaper crowed.

In response, the RAF considered buying a number of American planes, including the F-14, F-15 and F-16, in order to make up for the shortfall. The study commissioned by the RAF determined that the F-16 was too small, and the F-15 was unsuited to dealing with electronic countermeasures (ECM). The F-14, on the other hand, was judged to be ideally suited for Britain’s defense needs.

One serious problem with the F-14 was its sky-high price tag. As a potential way to lower expenses, it was recommended that the planes be purchased second-hand from the U.S. Navy or from Iran (prior to the Shah’s downfall). It is known that Britain made inquiries to this effect, and several British newspapers picked up the story.

However, what ultimately killed the potential F-14 acquisition was inertia—and time. By 1980, Iran as a potential vendor for discounted F-14s was out. Moreover, by 1982, Britain’s own Tornado ADV would enter service, boosting the number of British planes ready to fly. The threat of abandoning the ADV program and buying fighters from the United States might have been a factor in keeping the plane’s work on schedule; but after it was complete, the question of buying American planes became moot.