Rather Than Ban Facebook's Political Ads, Let's Fact Check Them 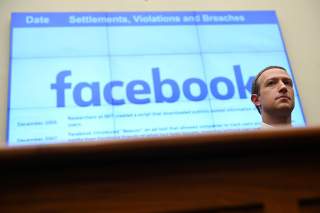 There are some famous natural experiments out there, such as the Dutch Hunger Winter study or the Oregon Health Insurance study. Or how about that nighttime satellite photo of North and South Korea showing the benefits of democratic capitalism vs. totalitarian communism. That may be the most famous and instructive natural experiment of all.

Silicon Valley may be giving us another enlightening comparison. Twitter is banning all political advertising, while Facebook will continue to run such ads — even those containing false or misleading claims. We should get a first read on the results on either the evening of Nov. 3 or morning of Nov.4, 2020.

Actually, Team Trump seems ready to draw its conclusion right now: Twitter is making a mistake. Campaign manager Brad Parscale called the move “yet another attempt to silence conservatives, since Twitter knows President Trump has the most sophisticated online program ever known.”

Now the smart money among tech journalists – who by and large seem to love the new Twitter policy – is that Facebook will likely soon follow suit. But I doubt it. As The New York Times recently reported in “Trump Campaign Floods Web With Ads, Raking In Cash as Democrats Struggle,” more than any other platform, “Facebook is the focus for digital campaign spending, and it is in many ways even friendlier turf for Mr. Trump’s campaign than in 2016.”

Given the centrality of Facebook to their campaign, Team Trump’s reaction to a Facebook ad ban would likely be far more negative than to the Twitter ban. They would even more strongly argue that the rules are being changed in the middle of the game. And they would have a point, especially since such a ban would seem to hurt them far more than Democrats. The entire GOP would go ballistic. And remember, this is already a party where some claim to think it would be wonderful if Facebook didn’t exist. A Facebook ad ban, if it were to happen, seems like it should wait until the start of the next election cycle.

Of course, still plenty of time to install some sort of fact-checking operation with an appeal process, a move Facebook has also rejected. But it seems some such effort – although imperfect – would be valuable to deal with what Twitter boss Jack Dorsey calls the “Increasing velocity, sophistication, and overwhelming scale” of microtargeted misinformation. That, even if the ads – although labeled as false – were still allowed to run.

This originally appeared at the American Enterprise Institute.