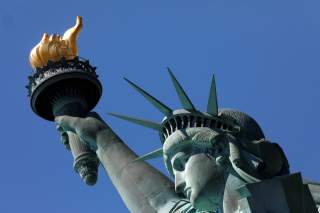 New Census data show that Americans are continuing to move from high-tax to low-tax states. One of the largest migration flows is from New York to Florida, as discussed in this Cato study.

The exodus from New York is sad, but the blame falls on the politicians who impose high-cost government on the state. New York’s high taxes are a side effect of excessive state and local spending.

The excess is clear when comparing New York to Florida.

The table below shows Census data for state and local spending in 2017. New York and Florida have similar populations of 20 million and 21 million, respectively. But governments in New York spent twice as much as governments in Florida, $348 billion compared to $177 billion.

On some activities, spending in the two states is broadly similar, such as on transportation, police, fire, parks, sewers, and solid waste. But in other budget areas, New York’s excess spending is striking.

New York spent $69 billion on K-12 schools in 2017 compared to Florida’s $28 billion. Yet the states have about the same number of kids enrolled—2.7 million in New York and 2.8 million in Florida.

New York spends vastly more on transit than Florida. Transit system revenues in New York are $6.8 billion per the Census, but that appears to leave about $14 billion a year in taxpayer costs. Because of its size and density, New York City does need an extensive transit system. But that does not mean that taxpayers should bear such high costs. Hong Kong is a huge and dense city with an extensive subway system that is run privately without taxpayer subsidies.

New York spends $10 billion more a year on interest costs than Florida. That is a clear example of how profligacy imposes an unnecessary burden on New York taxpayers.

If New York wants to stem its chronic loss of residents, it needs to slash spending on welfare, transit, and worker payroll and benefits. It should privatize transit systems, pursue school choice, and repeal collective bargaining for government workers. It should fund services from current revenues, not borrowing.

Most New York residents do not benefit from bloat in government payrolls, inefficient transit, excessive welfare, and deficit spending. To them, the high taxes are disproportionate to the government services received. That is why they are moving to better-managed states with lower taxes.