The Real Reason U.S. Naval Forces Would Beat Russia or China in a War 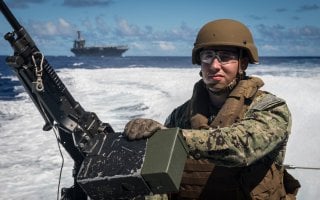 In the event of some kind of major power warfare on the open seas, allied combat support for U.S. Naval forces at war is something which could not be understated as it would not only massively expand the size and reach of a collective force engaged in combat but also share node-to-node information across vast, seemingly unpassable distances and domains.

A new Naval war strategy document specifically cites some of the decisive,  crucial roles allies would need to play in any kind of massive Naval war engagement. Of course, allied forces would naturally figure prominently in the event of large scale ocean war, yet one interesting point made by the new strategy explains that the mere presence and involvement of allies may simply stop war from happening in the first place.

“Alliances and partnerships are true force multipliers in times of crisis. Partner and ally deployments of combat-credible forces increase the legitimacy of our response, strengthen our deterrence, and demonstrate multinational resolve,” the text of the strategy, called “Advantage at Sea .. Prevailing With Integrated All Domain Naval Power,” states.

It is also likely not by accident that the text of the strategy makes a point to emphasize U.S.-allied information sharing and surveillance operations, something naturally able to exponentially expand and strengthen the operational reach of any force immersed in war.

This kind of tactical reality might almost immediately come to mind regarding two major, high-risk theaters of possible war… the Pacific and Europe, of course relating specifically to Russia and China to a large extent. As part of this, the strategy makes a clear reference to logistics and allied collaboration when it comes to enabling war operations.

“They interdict adversary war materials and commerce; provide access, basing, and overflight; and deliver additional critical capabilities, such as intelligence and logistics support. Allies and partners will also play a crucial role in deterring opportunistic aggression in additional theaters, as well as maintaining maritime governance and exposing malign behavior,” the strategy writes.

These factors may be part of why U.S. Navy destroyers regularly operate in the Black Sea demonstrating interoperability and solidarity with several Eastern European allies, many of which are NATO-aligned.  In a manner naturally fully aligned with this kind of regional activity, the U.S. Navy also makes a routine point of engaging in war preparations, exercises and training opportunities with major NATO allies in places such as the Baltic Sea, an area of great tactical relevance because it affords attack or long-range fire possibilities into Russian territory in the event of any kind of major warfare.

The relevance of the Pacific and U.S. Southeastern Asia allies is of course vital to the point wherein it might seem almost too obvious to mention, however, data sharing, surveillance, and maritime-oriented war preparations indeed take on new operational relevance in an area as vast and widely dispersed as the Asian theater.