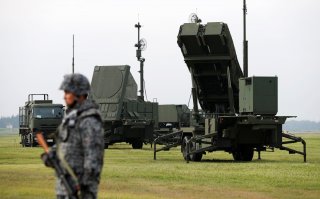 The announcement that the United States is moving Patriot batteries out of Saudi Arabia was a surprise to analysts with a stove-piped focus on the Gulf. Immediately following the announcement came erroneous suppositions about the intent and the meaning of the move.

The decision to remove Patriots from Saudi soil has very little to do with oil prices or changed assessments of the Iranian threat and everything to do with North Korea and China.

This spring while international attention focused on coronavirus, North Korea conducted nine missile launch tests in one month, a record according to Dr. Shane Smith of the National Defense University’s Center for the Study of Weapons of Mass DestructionThis is particularly noteworthy in light of the Center for Nonproliferation Studies’ (CNS) data indicating that North Korea’s missile launch test success rate improved by almost 30 percent in 2019.

On May 5, a report by imagery experts at Jane’s Intelligence Review and the Center for Strategic and International Studies confirmed in the unclassified space the existence of a near-completed missile assembly and storage facility large enough to accommodate all known North Korean ballistic missiles and launchers. It is an almost braggadocious representation of the missile modernization program North Korea has pursued over the past decade while simultaneously feigning sincerity about curbing its nuclear pursuits.

As such, the removal of Patriot batteries from Saudi Arabia should not be a surprise. They will once again be moved to Northeast Asia to guard against the more imminent threat from an unpredictable Kim Jong-un.

Conducting deterrence in two theaters can be dizzying. In the past two years the United States has had Patriots in place in the Gulf; moved some out (of Bahrain, in October 2018); deployed some back to the Gulf (May 2019); and will now move them out again. It is a geostrategic hokey pokey and it is necessary because missile defense platforms are a finite resource with a long delivery timeline. Nobody understands that better than Saudi Arabia, who dragged their feet on the Terminal High Altitude Area Defense system purchase until July 2019, pushing back the delivery date by a year and a half.

These moves are not a reflection of changing U.S. policy in the Middle East. They are a reflection of the heightened perception of threat in East Asia. The US Government’s unrealized dream of pivoting to Asia carried over from the Obama administration and was sustained by the Trump administration. The U.S. National Security Strategy (2017) commits the United States to “retain the necessary American military presence in the region to protect the United States and our allies from terrorist attacks and preserve a favorable regional balance of power.” The more strongly worded commitment regarding the Indo-Pacific is to “maintain a forward military presence capable of deterring and, if necessary, defeating any adversary.”

China’s top ranking in the U.S. hierarchy of threats is due to China’s economic strength, sophisticated strategies for undermining the U.S. defense supply chain and robust propaganda and soft power machines. Add that the nuclear program of concern in the Korean Peninsula is so much further along than Iran’s that it might pose a threat to the United States. North Korea’s Hwasong-15 intercontinental ballistic missile is believed to be able to fly 8,000 miles and reach the homeland if fired, no coronavirus pun intended, on a flattened curve.

The recent bluster of North Korea may or may not be encouraged by China. Either way, if Patriots must be moved away from oil facilities in the Gulf to deter it, the timing is not bad. The United Nations Arms Embargo on Iran set out in UNSCR 2231, Annex B, Paragraph 5 will expire this October. As if an alarm went off at the t-minus six-month mark, attention to this embargo spiked in April and will remain high due to the heated debate about whether this expiration should be allowed to happen.

The U.S. administration argues that the language in the resolution allows for a snapback of the restrictions if Iran does not meet the terms it committed to in the Iran nuclear agreement (JCPOA). Iran argues that the snapback language tied to the JCPOA cannot be binding if the United States left the agreement. Europe and countries in the Gulf like Oman, Kuwait, and Qatar are courted by both sides.

As long as these countries are not fully convinced that allowing the embargo to lapse would present no greater threat to regional security and stability, Iran cannot afford to act provocatively. Doing so would reinforce the U.S. position that Iran would exploit the end of the embargo to increase the lethality of their regional destabilization activities. Therefore, the risk of new attacks on the oil facilities in Saudi Arabia that the Patriots are departing is greatly diminished in the near term.

U.S. partners on the Arabian Peninsula should be concerned about the risk of Iranian escalation after October, when the US will inevitably enact sanctions of its own if an embargo snapback proves impossible and Russia blocks follow-on action in the UN Security Council.

But before Gulf watchers cry foul about the relocation of Patriots once in the Gulf, they should examine the strengthening ties between the Gulf and China that compound U.S. concerns about competing with Asia’s Great Power. The more the Gulf cozies up to the hegemon in America’s number one region of threat, the fewer resources the United States can devote to protect them from the threat on their border.

Kirsten Fontenrose is the Director of the Atlantic Council’s Scowcroft Middle East Security Initiative, and former Senior Director for Gulf Affairs at the National Security Council during the Trump administration.