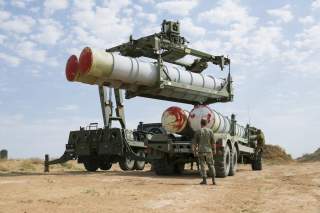 On October 5, 2018, Indian prime minister Narendra Modi and Russian president Vladimir Putin signed off in New Delhi on a deal to transfer five advanced S-400 Triumf surface-to-air missile systems in exchange for $5.43 billion—Delivery of the S-400s is to follow in two years. Additionally, India will spend $2.2 billion to purchase four Russian missile frigates and negotiate license-manufacture of AK-103 assault rifle.

Ordinarily such a transaction would trigger sanctions from the United States due to the passage in 2017 of the Countering America’s Adversaries Through Sanctions Act, which stipulates punishments for countries that purchase Russian military equipment. Waivers are possible, but ostensibly only accorded for corner cases such as spare parts.

In fact, just a month earlier in September CAATSA sanctions were imposed on China for its purchase of Su-35 Flanker-E fighters . . . and S-400s.

However, the U.S. embassy in New Delhi is playing coy about repercussions, issuing a statement that the CAATSA was not intended to “impose damage to the military capabilities of our allies or partners.” And as the United States is very keen to make India its partner in an alliance to contain China’s military expansion, most observers expect the law will be selectively waived.

Such inconsistency may soon have rippling repercussions, however, as it will weaken the credibility of U.S. sanctions on its NATO partner of Turkey, which is also purchasing S-400s over strenuous objections from Washington. As Washington is selling dozens of F-35 stealth fighters to Ankara, the Pentagon is particularly worried that the S-400 systems in Turkey could be used to study the stealth jet’s radar signature and possibly even hack into its computers. The summer of 2017, the U.S. Congress passed a defense authorization act blocking transfer of F-35s in 2019 (but not before) pending further review.

However, both the Pentagon and Lockheed seem confident the Turkish F-35 deal will still go through. Giving India a waiver for its S-400 purchase will certainly reinforce the impression that sanctions will only be selectively applied.

Why are so many countries willing to risk Washington’s wrath for Russian anti-aircraft missiles? Quite simply, while the U.S. military expects its fighter planes to seize air superiority, Russian ground forces have never taken control of the skies for granted and invested much more in ground-based anti-aircraft systems. Using its longest range missiles, an S-400 can threaten aircraft up to two hundred miles away—while at best the Patriot radius of action comes to half that. (Admittedly, the S-400’s effective range is closer to 75–160 miles when engaging smaller, more agile targets such as fighters.)

U.S. surface-to-air missile development in the last two decades has focused on countering ballistic missiles, which are not susceptible to fighter interception. The Pentagon has deployed ABM-capable systems such as the Patriot PAC-3 MSE, THAADS, GMD and the Navy’s SM-3. But if you’re more concerned by enemy aircraft, the Russian systems probably offer the best bang for buck.

India has a very long military relationship with Russia dating back to the the height of the Cold War. When the United States imposed an arms embargo on India due to the 1965 Indo-Pakistani conflict, the Soviet Union stepped into the gap. In 1971, Soviet-built T-55 and PT-76 tanks, Mi-4 helicopters, MiG-21 jet fighters and Styx anti-ship missiles played a major role in India’s defeat of Pakistani forces in what is now Bangladesh. A Soviet fleet even faced down an American carrier task force dispatched to the Indian Ocean to pressure New Delhi into calling off the offensive.

In the post–Soviet era, the Indian military continues to rely on Russian hardware for top weapon systems such as the T-90 tank, Su-30MKI Flankers and MiG-29 Fulcrum fighters, both nuclear and diesel-electric submarines, and even an extraordinarily bad aircraft carrier.

Today, however, New Delhi may be drifting more into Washington’s orbit. One reason is that Russian weapon systems, though generally cheaper, have demonstrated reliability issues and poor after-purchase support. Another is that the U.S. alliance with Pakistan is weakening rapidly. The main issue, however, is New Delhi’s tense relationship with Beijing, which has its roots in a 1962 border war, but is growing more acute due to China’s dramatic military buildup and growing alliance with Pakistan. Signs of the new relationship include a shared military basing agreement in 2016, and U.S. sale of P-8 maritime patrol planes, C-17 and C-130 transports, and Apache attack helicopters.

There have been preliminary signs that New Delhi may be tempted by the U.S. FA-18 Super Hornet or F-35 stealth jets. Meanwhile, India recently terminated its funding for an FGFA stealth fighter developed by Russia, derived from the troubled Su-57.

Recently, Russia has signaled to India its willingness to deepen ties with India’s rivals in Beijing and Islamabad if their special relationship is allowed to atrophy. After all, Russia is selling S-400s to China as well as India, and recently invited Chinese forces to participate in its huge Vostok military exercise. In the end, for Moscow, weapons sales are a key source of income, not something done in service of an ideological cause or notional alliances.

Modi’s buy into the S-400 deal, therefore, is not just about getting highly capable SAMs to offset China’s rapidly improving air power, which now includes operational stealth jets. It’s also about reassuring Moscow that it still has time to invest in its relationship with an old ally.

Meanwhile, Washington is desperately trying to enlist India into an unofficial alliance of countries seeking to contain China’s military expansion in the Pacific and Indian Ocean. But dating back to the Cold War, New Delhi has resisted having its foreign policy webbed into another country’s strategic calculations. That’s why Washington is likely to continue patiently courting a deepening security relationship with New Delhi and ignoring its own legally mandated sanctions, even as India continues to maintain its older ties with Moscow.