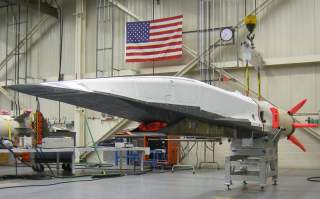 The majority of DoD's funding for hypersonic weapons development currently goes toward precision strike or offensive weapons, as opposed to missile defense programs. Next year’s DoD budget for overall hypersonic investments is approximately $2.6 billion, with defensive developments making up only about six percent ($157.4 million) of that investment budget. Moreover, the budgetary figure for defensive developments will drop by almost a quarter in the coming years, from $157.4 million next year to $122 million by 2024.

According to Michael E. White, Assistant Director of Hypersonics at DoD, "If you look at the portfolio and the time phasing on the portfolio, we are stepping out first on the offensive side as we study and assess the path forward to get a robust defensive strategy." A major factor influencing the DoD’s course of action is that offensive systems are technically easier and cheaper to develop. General John Hyten, commander of U.S. Strategic Command, warned the Senate Armed Services Committee earlier this year, “We [U.S.] don’t have any defense that could deny the employment of such a weapon [hypersonic missiles] against us.” Both White and Hyten reiterate the importance of increased research and development in defensive capabilities. Offensive development may be less costly, but it does not reduce the need for a strong defense, which the U.S. currently lacks.

The realities of adversary advances in offensive hypersonic weapons systems, combined with the fact that hypersonic offensive capabilities are generally easier and cheaper to develop than defensive capabilities, has naturally directed the DoD’s budget towards offensive capabilities. But the potential long-term peril of this course of action was further demonstrated on August 2 of this year, when the U.S. withdrew from the 1987 Intermediate-Range Nuclear Forces (INF) Treaty. The INF Treaty banned U.S. and Russian forces from placing land-based missiles in Europe with a range between 310 and 3,400 miles to reduce the ability to launch short notice nuclear strikes. Many fear withdrawing from the INF treaty may not only signal the beginning of a new arms race between the U.S. and Russia but also potentially with China. Furthermore, this could potentially lead the U.S. to withdraw from or allow to lapse the New Strategic Arms Reduction Treaty (START), which is set to expire in 2021.

The demise of well-established nuclear arms treaties by major world powers not only has destabilizing geopolitical effects but could serve as a catalyst for greater focus and reliance on offensive hypersonic missiles as the newest forms of nuclear delivery vehicles. Withdrawing from such treaties could also provide opponents with first-strike or preemptive strike capabilities on nuclear delivery system sites. Additionally, this scenario could see the defensive role of hypersonic missiles serving as a deterrent by intercepting offensive nuclear delivery systems.

This rapidly developing geopolitical reality serves to highlight the risk posed by the U.S.’s lack of viable hypersonic weapon defense systems. The reality that hypersonic missile defense takes more time and money to develop should inherently necessitate that the DoD allocate greater parity between offensive and defensive capabilities with regard to developmental focus and budget. However, this highlights two pitfalls that the U.S. must take caution in avoiding. First, the DoD should remain clear of a cost-imposition strategy – where x dollars are spent on a weapon in the hope of inducing an adversary into spending x dollars on a weapon to counter it. Thomas Karako, a top missile defense expert at the Center for Strategic and International Studies, notes that Chinese hypersonics, in particular, have "all the markings of a cost imposition strategy."

Second, the government – Congressional oversight working with the DoD and the White House – must ensure that the money and resources spent are done so wisely with timely and effective results. The DoD, unfortunately, has a long track record of spending billions of dollars on missile defense systems that do not deliver as advertised. Such was the case, among others, with the Clinton and Bush administration-era ICBM-interceptor ground-based midcourse defense missile (GMD) defense system, and U.S. Navy’s ship-based short-to-intermediate range ballistic missile interceptor – the Standard Missile 3 (SM-3). The DoD’s tests showed the majority of SM-3s failed to destroy their targets and the GMD only regularly succeeded in highly orchestrated scenarios – both of which had serious and exploitable flaws. This led analysts in the journal Arms Control Today to conclude that shortcomings such as these should be a "strong warning" to policymakers who believe that U.S. missile defense systems will "actually discourage future adversaries from pursuing ballistic missile programs."

Bishop Garrison is the president and co-founder of the Joseph Rainey Center for Public Policy. He previously served in multiple national security positions in President Obama’s administration and as the deputy foreign policy adviser on the presidential campaign of Secretary Hillary Clinton.

Preston Lann is a research assistant for the Joseph Rainey Center for Public Policy.

This article by Bishop Garrison and Preston Lann originally appeared at Real Clear Defense. This article first appeared in 2019.