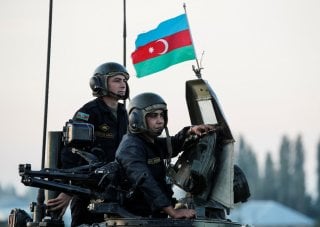 History and fate have burdened the tiny, landlocked nation of Armenia, most recently ranked The Economist’s Country of the Year, with the misfortune of not only one, but two, hostile neighbors: Azerbaijan and Turkey. The most recent conflict among these countries over Artsakh, also known as Nagorno Karabakh, is sadly only a sequel in the series of their historic and deadly hatred of the Armenian people. While the Armenian Genocide, which destroyed two-thirds of Armenia’s population, may have been the apex of the goal to annihilate Armenians in the region, its legacy persists in the conflict today.

Of course, the governments of Azerbaijan and Turkey have little love for their own citizens either. Azerbaijan is one of only three countries—along with North Korea and Syria—that declares itself a “constitutional republic,” but transfers power by inheritance within a ruling family. Ilham Aliyev has effectively elected himself president four times since 2003 and appointed his wife as First Vice President, just to be extra secure. The country is characterized by endemic corruption; the president’s offspring, with no clear sources of income, own banks, and mansions all over the world, according to the Azerbaijani Laundromat Project. In this oil-rich fiefdom, ordinary people lack basic rights in an “appalling” human rights environment and face endemic torture and ill-treatment of journalists, lawyers, and opposition activists. An Azerbaijani officer, who axed an Armenian colleague to death in his sleep during a NATO training in Hungary, was extradited to Azerbaijan and made a national hero. Among ordinary people, the word Armenian is used as an insult, encouraged by Aliyev personally.

Particularly since the attempted coup in 2016, the Turkish government also has abandoned any commitment to democratic norms, with a constitutional referendum granting Erdogan the authority to remain in power indefinitely. The government has jailed tens of thousands, seeing coup plotters in every corner, and used that excuse to jail journalists, activists, and political rivals and to destroy the country’s once independent media outlets. The country’s ruling class remains obsessed with what they still see as the “Armenian problem.” There are near-daily media attacks on Armenians as a global cabal in the press and ever-present threats and incitement by Erdogan himself, resulting, predictably, in ongoing hate crimes against the country’s remaining Armenian community, including the still “unsolved” murder of journalist Hrant Dink.

This long-simmering hatred has found its most recent outlet in Armenia’s conflict with Azerbaijan, closely allied with Turkey. One Turkish journalist in a government-run publication urged his government to intervene and “finish the job” of the Armenian Genocide with an “accidental” bomb in Yerevan, Armenia’s capital. Of course, Turkey and Azerbaijan sometimes have diverging interests; Azerbaijan is majority Shia, while majority Sunni Turkey has often declared itself the global champion of Sunnis. But Erdogan and Aliyev are bonded in their shared antipathy towards Armenians, adopting the motto “one nation, two states.” Erdogan has now taken it up a notch, actually intervening in support of Azerbaijan—not only by holding joint military drills but also by stationing and using Turkish F-16s at the Ganja military airport, as well as recruiting hundreds of young Syrian mercenaries to fight against the Armenians. Turkey’s cabinet, and more precisely the defense minister, seems to be in charge of the Azeri army’s operations, while Azeri Defense Minister Zakir Hasanov has not been seen or heard from for at least the first ten days of the recent military escalation.

The center of the dispute, Artsakh, has always had a majority Armenian population and has formed an integral part of historic Armenia since it appeared on maps more than two millennia ago. In 1923, Stalin made Artsakh an autonomous enclave within Azerbaijan with the stroke of a pen, arbitrarily assigning boundaries to newly established Soviet states. But in 1988, as the Soviet Union was collapsing, the very first thing the majority Armenian population of Artsakh demanded was self-determination and re-unification with Armenia according to the Soviet laws of the time. This was even how Azerbaijan declared its own independence from the USSR. Azerbaijan refused to accept this, and only in 1994, after a brutal war, did local Armenians secure control over Artsakh. But Turkey, in solidarity with Azerbaijan, never modified its bellicose rhetoric against the Armenians. Since 1992, Ankara has helped enforce an extremely damaging economic blockade against Armenia, which must attempt to survive with over 89 percent of its borders closed.

Now, Azerbaijan is using not only Israeli and Turkish drones and weapons to bombard civilian towns in Artsakh and Armenia, but using wildly indiscriminate ones too. Since the first days of its attack, Azeri forces have been bombarding Stepanakert, Artsakh’s capital, with internationally banned cluster munitions via Lar-160 multiple rocket launchers, all made in Israel, killing hundreds of Armenian civilians. Azerbaijan blatantly violated three ceasefire agreements brokered by Russia, France and the United States during this month-long violence and resumed fighting.

Yesterday, Azerbaijan bombed a maternity hospital in Stepanakert, hours after a group of eighty genocide scholars made a statement on the imminent genocidal threat deriving from Azerbaijan and Turkey against the Armenians of Artsakh. For Armenia, a nation of three million up against the 92 million of Turkey and Azerbaijan, this is an existential battle waged by the powers who committed the first genocide of the twentieth century against them with impunity. For the international community, this should be a civilizational frontline against two murderous dictatorships driven by racial hate. After all, when such regimes get away with murder in one place, their crimes are mimicked and reach all corners of the globe.

Critically, it would cost the peaceful, democratic world almost nothing to stop the atrocities underway against not only the Armenians of Artsakh but also in Armenia proper. Unlike the tangled conflicts in so much of the world, in this situation peace can be secured by recognizing the right to self-determination of the Armenians of Artsakh as enshrined by the UN Charter, mounting diplomatic pressure on Turkey and Azerbaijan, as well as implementing the long-awaited U.S. sanctions against Turkey and reinstating the sanctions against Azerbaijan and its corrupt officials. It would be unconscionable not to exert this pressure on the two aggressors to avoid more losses of life.

Harout Ekmanian is a New York attorney specialized in international law and human rights. His views do not represent those of his employer or their clients.