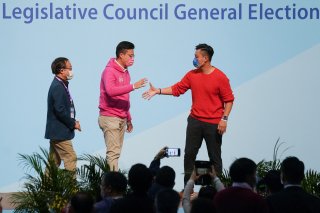 Elections to Hong Kong’s Legislative Council (LegCo) took place on Sunday for the first time since the onset of a highly controversial national security law—a law that critics have claimed ended the special administrative region’s semi-autonomy from mainland China.

The number of directly elected seats within the LegCo was sharply reduced, and the ability to hold office within it was restricted to “patriots only,” requiring outward displays of loyalty to Beijing from all prospective lawmakers, according to new electoral rules established by the territory’s governing authorities in March.

Consequently, with nearly all vocal opposition candidates disqualified, the election saw a record low turnout of 30.2 percent, which was considerably lower than the 43.6 percent turnout in 2000. That means it is the second-least attended contest with only half of the turnout in 2017, the last election cycle. The twenty contested LegCo seats were each awarded to legislators within the territory’s pro-Beijing camp.

In advance of the election, the government of Hong Kong, led by controversial Chief Executive Carrie Lam, had attempted to bolster turnout. It pressed Hong Kong residents to vote and argue that the government should be representative within the new constraints. Blanket text messages were sent to all phones in the territory reminding the city’s residents of the election and urging them to cast their ballots, and public transit was made free within the city during polling hours.

Despite these efforts, some dissidents urged people to remain home or cast blank ballots, claiming that low turnout would send a message that most Hong Kong residents disapproved of the changes. Inciting someone not to vote, or to cast an invalid ballot, is illegal in the city, and more than ten activists were reportedly arrested on that charge in the run-up to the election. To avoid protest incidents during the election, roughly ten thousand police officers were sent to polling stations around the city.

The territory’s authorities have claimed that the election law overhaul was necessary to ensure “stability” in the aftermath of the year-long protest movement that took place in Hong Kong from 2019 until 2020. That protest, which had begun over controversial changes to an extradition law with mainland China, led to widespread unrest in the territory and captured worldwide attention.

However, the protest movement ultimately declined in 2020 following a government crackdown and the advent of the coronavirus pandemic, which led most protestors to remain at home and allowed the governing authorities to re-establish control.