Records Broken: Will Sky High Gas Prices Ever Come Down? 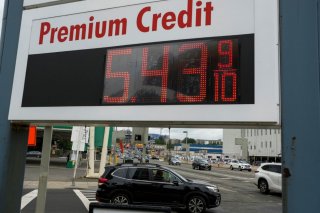 Last week, the average gas price in the United States went above $5 for the first time in history. Now, they’re even higher.

The average price as of Monday was $5.01 per gallon, GasBuddy said in its weekly report. That represents $0.157 cents from the start of the previous week. The $5 threshold had been crossed in the later part of last week.

“For the first time ever, last week saw the national average reaching the $5 per gallon mark as nearly every one of the nation’s 50 states saw prices jump. For now, the upward momentum may slow down, but we are still just one potential jolt to supply away from heading even higher,” Patrick De Haan, head of petroleum analysis at GasBuddy, said in the blog post.

“Gasoline demand, while rising seasonally, is still well below previous records, but remains impressive with prices in all states at record levels. Should the rise in price finally start to slow demand’s rise, we could see some breathing room, but for now, it seems like Americans are proving resilient to record highs.”

The most commonly seen price in the United States was $4.99, a huge jump from the week before, but still below $5.

DeHaan also said on Twitter that “Americans [are] now spending $730 million more every day on gasoline than a year ago. June alone could cost Americans $20 billion more to fill their tanks vs last June.”

The other weekly report Monday, from AAA, also found that the average price of gasoline in the United States is $5.01—and noted that a barrel of oil is now priced at $120, nearly double what it cost last August. The $5.01 figure represents the highest average price in the twenty-three years that AAA has been collecting such data.

“Based on the demand we’re seeing, it seems high prices have not really deterred drivers,” said Andrew Gross, AAA spokesperson. “If prices stay at or above $5, we may see people start to change their daily driving habits or lifestyle, but it hasn’t happened yet.”

AAA also announced a promotion, in which every Wednesday through Labor Day, “Krispy Kreme will lower the price of a dozen Original Glazed donuts to the national average that AAA reports each Monday.”

President Joe Biden next month is planning to visit Saudi Arabia and is expected to pressure that country’s de facto ruler, Crown Prince Muhammad Bin-Salman, to convince OPEC+ to up energy production. An analysis in The Hill, however, suggests that the controversial move is unlikely to work.