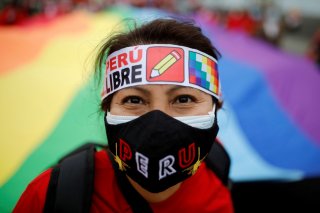 Last month Peruvian voters chose Pedro Castillo as the country’s president-elect. He will be inaugurated on July 28. The parallels between the Peruvian election and the U.S. election last November are all there: a close margin of victory, populist candidates mobilizing the rural masses, an ongoing global pandemic, and cries of fraud. In both cases, the loser challenged the election. However, in Peru, it was not the populist who cried fraud. This time it was the insider—the institutionalist—who challenged the election, calling for recounts and investigations. This unexpected circumstance illustrates how vulnerable democratic institutions are in Latin America.

In the United States, the Constitution, voting rights, election rules, and the judicial process are institutions that historically have been widely respected across the political continuum. But by crying fraud Donald Trump caused his supporters to question the legitimacy of the institutions that have held our democracy together. He positioned himself as a populist setting out to debunk the status quo. Likewise in Peru, the losing candidate, Keiko Fujimori, is seeking to overturn the results with accusations of fraud and a legal battle. The elections in Peru are especially concerning because Fujimori is not a populist leader, yet she has managed to claim the populist message of failing institutions and corrupt electoral systems.

Trump and Fujimori are alike in two important ways: they both lost their respective presidencies, and they both immediately attacked the election system itself. What they do not have in common is their base. It is easier to understand how Trump was able to rally support for his accusations of fraud because his base was comprised of people who were convinced they had been left behind. Fujimori launched her attack without the same populist base. And yet her ability as the ultimate insider to land effective punches on Peruvian democracy reveals just how weak the nation’s institutions are.

Populism springs from a democratic impulse, but ultimately it becomes democracy’s undoing. From developed to developing countries, populism has emerged as a call for accountability, fair representation, and economic empowerment from the people the system is failing. In Latin America, populist leaders and political parties only drive forward an endogenous cycle of underperforming institutions. Instead of having institutional support from well-rooted political parties or the legislature, populist leaders garner all their political legitimacy from popular support.

From Hugo Chávez to Rafael Correa, Evo Morales to Jair Bolsonaro, populist leaders have pitted the people against the very institutions designed to represent them. Such leaders are applauded for criticizing the legislatures instead of working with them and ignoring constitutions instead of defending them. Unfortunately, this cycle only sets itself up to be repeated: if a country’s political systems are constantly being uprooted and rejected by the people, there is no chance for democracy to take root and for democratic institutions to prove their utility.

The pandemic has stripped Latin America of any false democratic pretense. Presidents across the region have been met with discontented constituents who are appalled by their leaders’ inability to combat the social and economic impacts of the pandemic. In the wake of protests, the Colombian government responded with violent repression. To eliminate competition in the upcoming elections, Nicaragua’s sitting president arrested five of his presidential rivals. Brazil’s elections are still a year out, but President Jair Bolsonaro is already warning of fraud, even suggesting canceling the elections. So, what has happened to the institutions that are in place to safeguard against this type of political overreach? The legitimacy of these institutions has been eroded by populists and those appropriating the populist message.

Pedro Castillo easily cast himself as a people’s politician. He was a rural school teacher running on a promise to rewrite the constitution, nationalize resources, and address rising poverty. He blames Peru’s rising inequality on the system and the political dynasties that have dominated Peruvian politics for years. Castillo may be correct in his accusations, but his discourse only perpetuates the feelings of distrust the people have in judicial and electoral institutions.

Peru’s election is a testament to the loss of respect that institutions have faced across Latin America from populists and institutionalists alike. Institutions are like batteries being used by both sides to bolster their own agenda, but neither side has committed to recharging them. On the one hand, Castillo is calling for a remodel of the institutions and, on the other hand, Fujimori is undermining the legitimacy of institutions with allegations of fraud.

Institutions are the bedrock of democracy. Populists promise to defend the people, but their message rings hollow when democratic institutions are the object of their assault. With its principal institutions in the hands of politicians who fight battles rather than wars, the question becomes: are Peru’s institutions strong enough to withstand the assault of the recurring populist impulse?

Alexandra Graham is a master’s student of International Affairs at Texas A&M University. With a concentration in Latin American studies, she has focused her research on the democratization and political history of the region.