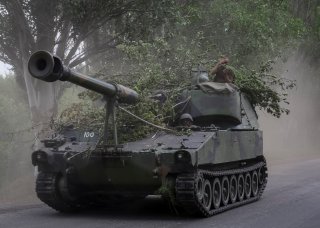 Russian, Ukrainian, and Western sources have offered conflicting accounts of the explosions that rocked a Russian military base in Crimea on Tuesday.

“Demilitarization of the Russian Federation—an integral part of global security ensuring. The future of the Crimea is to be a pearl of the Black Sea, a national park with unique nature and a world resort. Not a military base for terrorists. It is just the beginning,” tweeted presidential advisor Mikhailo Podolyak after reports emerged of powerful blasts at the Saki air base near the village of Novofedorivka in Russian-annexed Crimea. “Today’s explosions in Novofedorivka are another reminder of who Crimea belongs to. Because it is Ukraine,” added Ukrainian deputy prime minister Iryna Vereschuk.

“Crimea is Ukrainian and we will never give it up,” said Ukrainian president Volodymyr Zelenskyy, without referencing the purported attack. But Kyiv has not formally accepted responsibility for the explosion, with top Ukrainian officials offering a slew of clashing accounts. “Of course not. What do we have to do with this?” Podolyak reportedly replied when asked by news outlet Dozhd if Ukraine was behind the attack. According to Reuters, a senior Ukrainian official suggested the attack was carried out by partisan saboteurs. Other Ukrainian officials attributed the explosions to Russian incompetence. In an interview, spokesman Oleksiy Arestovych said the blasts were caused either by a Ukrainian missile strike or sabotage work carried out by Ukrainian guerillas in Crimea.

A U.S. official told the Washington Post on the condition of anonymity that the alleged strike was not conducted with a weapon provided by the United States. Citing an unnamed Ukrainian official, the New York Times reported that the explosion was caused by “a device exclusively of Ukrainian manufacture.”

Top Kremlin officials have previously insisted that a Ukrainian strike against Crimea, annexed by Russia in 2014, is a red line for Moscow. Former Russian president Dmitry Medvedev threatened in July that such an attack would prompt a “Judgment Day” response.

The Russian Defense Ministry told reporters that several munitions were detonated at a storage site due to an accident, not internal sabotage or a Ukrainian strike. The explosions occurred as a result of “a violation of fire safety requirements,” a senior Russian Defense Ministry source reportedly told Russian state news outlet RIA Novosti. “There are no signs, evidence, or facts to suggest a deliberate impact on the munitions with the intent of detonating them,” the source added. Russian-appointed local authorities announced on Wednesday that the airfield explosions resulted in fourteen injuries and left one civilian dead, adding that they plan to repair the structural damage within ten days. While Russia denies that any aircraft were damaged, Ukrainian officials claim as many as nine Russian warplanes were destroyed by the blast.