Remington Pledges One Million Rounds of Ammunition for Ukraine 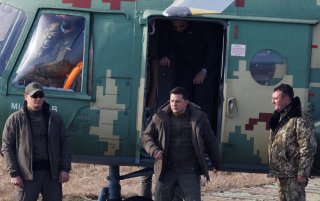 NASCAR team owner Richard Childress made some news last week when he announced that he was donating one million rounds of ammunition to the war effort in Ukraine. Childress announced that the donation would be made in conjunction with Ammo, Inc., an ammunition company that he is a board member of. He added that he is working on government approvals and logistical planning for the donation.

The idea, per an Ammo, Inc. press release, came after Ukrainian president Volodymyr Zelenskyy was quoted as stating that the country is in need of ammunition to fight back against the Russian invasion. Ammo “heard … Zelensky’s plea for ammunition and would like to help. Ammo Inc. is offering to donate 1 million rounds of ammunition to the Armed Forces of Ukraine in support of their fight for independence and freedom.”

Now, another arms manufacturer has matched that pledge. Remington Arms announced on Monday that it is also sending one million rounds to support Ukraine.

“We heard President Zelenskyy's call. Remington is sending 1M rounds of ammo to Ukraine,” the company said in a tweet.

Some have asked how these companies, amid an ammunition shortage that has made ammunition scarce in parts of the United States for the last two years, can donate that much ammunition to a foreign country. However, as an analysis published last year showed that Remington was producing about one million rounds a day, the donation would only amount to about a day’s worth of ammo.

The original Remington company went into bankruptcy in 2020, and that lost capacity was thought to contribute to the early days of the shortage. The company was broken up in a bankruptcy auction that year, with Vista Outdoors purchasing its manufacturing business.

Did Zelensky Really Say That?

Meanwhile, the Washington Post’s fact-checking column this week looked into whether Zelensky really did utter that famous quote asking for more ammo. The oft-quoted line from the Ukrainian president—“the fight is here; I need ammunition, not a ride”—was not made in a public speech. Instead, an Associated Press story attributed it to “a senior American intelligence official with direct knowledge of the conversation.” The Ukrainian Embassy in the United Kingdom did later quote the line in a tweet, which has itself been cited by various news organizations as an official government request. The Washington Post did quote Zelensky’s own press secretary as stating that “even if he did not say it, all of his actions and his requests mean that.” Zelensky has also asked allies for equipment in public speeches.

As Ukraine is currently fighting a war against the powerful Russian military, it would seemingly need all the ammunition it can get.