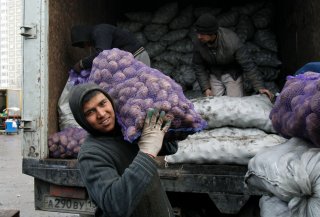 The relationship between migration and demographic challenges, such as age and employment, has attracted attention for a number of years because the working-age population in low- and middle-income countries has continued to increase, while the working-age population in high-income countries has continued to decrease. Given this imbalance, migration would seem to provide a solution to the world’s age and employment challenges. But does it?

One of the factors driving migration among people of working-age from low- and middle-income countries is remittances. Put simply, remittances are the monies that individuals who have migrated for work to another part of their country, or to another country, send home to family members for the purposes of, for example, satisfying basic household needs, diversifying household income, or investing in the household’s future, which may include building a new home or setting aside money for children’s education, among other things. According to the World Bank, “if China is excluded, [remittances] are the largest source of foreign exchange earnings in low- and middle-income countries.” Remittances have also surpassed Official Development Assistance (ODA), or foreign aid, in recent years, leading some in the development field to conclude that remittances may be a more predictable, reliable, and versatile form of development assistance.

According to the World Bank, as of 2020, the top five remittance-receiving countries relative to Gross Domestic Product (GDP) were: Tonga (remittances accounted for 37.2 percent of its GDP), Somalia (35.3 percent), Kyrgyz Republic (31.3 percent), Tajikistan (26.7 percent), and Lesotho (25.5 percent). For the Kyrgyz Republic and Tajikistan, two former Soviet republics located in Central Asia remittances are especially important.  Seasonal labor migration for the purposes of earning and sending home remittances has been a mainstay of many post-Soviet economies since the breakup of the Soviet Union in 1991. According to the same World Bank dataset, one in five of the top thirty remittance-receiving countries relative to GDP are former Soviet republics. In addition to the Kyrgyz Republic and Tajikistan in third and fourth places, respectively, are Moldova (in seventeenth place with remittances accounting for 15.7 percent of its GDP), Georgia (in twenty-first place with 13.3 percent), Uzbekistan (in twenty-sixth place with 12.1 percent), and Armenia (in twenty-ninth place with 10.5 percent).

As noted above, in some contexts, migration and remittances are a means for a household to invest in its future. However, this is not the case for the greater share of, for example, Tajikistan’s labor migrants, who seasonally migrate to Russia for low-skilled jobs, typically in construction or trade. According to a 2021 UN Food and Agriculture (FAO) report: “More than 80 percent of the households in Tajikistan that receive remittances reported that they spend them primarily on food and other basic needs.” When Russia closed its border in spring 2020 on account of the Covid-19 pandemic, this resulted in some Tajikistani labor migrants getting trapped in Russia, while others who usually migrated to Russia in the spring found themselves unable to do so. According to the same FAO report, this temporary, albeit drastic, check on migration translated into a reduction in remittances and an increase in food insecurity in Tajikistan with upwards of one-third of the population experiencing malnutrition in 2020.

While migration and remittances rebounded from the first six months of the pandemic much more quickly than initially anticipated, according to the World Bank, the pandemic reminded migrants and development specialists, among others, that migration does not necessarily provide a solution to the world’s age and employment challenges. Rather, migration can pose challenges in its own right.

For example, beyond pandemics, there have always been power imbalances between migrant “sending” countries, such as Tajikistan, and migrant “receiving” countries, such as Russia. State sovereignty allows the latter to define the terms of a migrant’s entry, exit, and stay. International organizations, such as the International Labour Organization (ILO), attempt to set standards to protect the rights of workers, including migrant workers. While advocacy organizations, such as Human Rights Watch, document and expose the abuses that migrants often experience in their “host” countries—abuses which include, but are not limited to, unsafe living and working conditions, withholding of documents, withholding of payments, discrimination, and emotional and physical abuse.

Migration also poses challenges for the family members of the migrants who stay behind. For example, my research on seasonal labor migration in Azerbaijan, a former Soviet republic located in the Caucasus, has shown that seasonal labor migration can significantly increase intra-household tensions among remaining family members with respect to who is responsible for completing what household tasks—tasks upon which the household’s livelihood is dependent—and who has the authority to make which household decisions, including money-management decisions, which can impact whether or not the household’s children are able to further their education.

Migration can definitely contribute to solving some of the world’s demographic challenges. But migration is at best a partial solution because migration is at the mercy of pandemics and power politics—most recently seen in the case of Belarus and the European Union—that are out of migrants’ and their family members’ control. Migration can also substantially increase social and emotional stress on migrant-sending households and communities in ways that non-migrating members of society might not find acceptable if they were asked to live and work in such conditions.

Jennifer Wistrand is an assistant teaching professor of global and intercultural studies at Miami University in Oxford, Ohio.