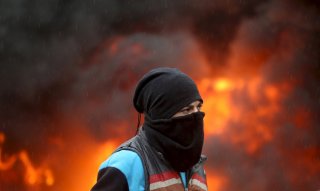 Capt. Taylor Force was an Eagle Scout, a West Point graduate who served multiple tours in Iraq and Afghanistan, and an all-around terrific young man. In 2016, on a university study trip to Israel, he was murdered by a Palestinian terrorist on a stabbing rampage near Tel Aviv’s beach. He was twenty-eight years old.

Then-Vice President Joe Biden, only minutes away, meeting with Israeli officials, heard the sirens of first responders racing to the scene. His coincidental personal connection to Force’s death makes his emerging Palestinian aid policy hard to swallow: the proposed aid will effectively reward such attacks, violating both letter and spirit of an anti-terror-funding law bearing Force’s name.

Force’s family suffered another blow when Palestinian authorities declared the terrorist, killed mid-attack by police, a “hero” and “martyr.” That designation entitled his family to substantial lifetime payments. Incredibly, those special “pay-for-slay” payments to families of such “heroic” terrorists—dozens of whom murdered U.S. citizens like Force—were effectively underwritten by hundreds of millions of dollars in annual U.S. aid to the Palestinian Authority (PA). In 2017, those reward payments totaled $345 million. Is there a more obscene use of our American taxpayer dollars?

Yet, even facing an aid cutoff, the cash-strapped PA insists on honoring, subsidizing and rewarding terrorists, condemning efforts to stop the terror-incentive payments as “insane” and “aggression against the Palestinian people.”

State Department criteria judge whether aid “directly benefits” the PA by “the extent of ownership or control the PA exerts over…the primary beneficiary or end user of the assistance,” and “whether the assistance or services provided directly replace assistance or services provided by the PA.” For example, paying the PA’s electrical bills frees up PA funds for terror reward payments, and is thus prohibited. The de facto control the authoritarian PA exerts over all Palestinian institutions means almost all assistance represents a direct benefit.

The Biden administration is, nevertheless, forging ahead with new assistance to the Palestinians, notwithstanding the PA’s refusal to budge on blood money payments. It has quietly moved to give $130 million ostensibly for Palestinian law enforcement and civil society. A recently leaked State Department memo implies that the aid will go through various civil society groups and NGOs not officially connected to the PA.

While that sounds theoretically reasonable, practically it merely elevates form over substance. It circumvents U.S. law by essentially laundering funds that will still ultimately benefit and fall under the control of an unrepentant PA, still doling out rewards for terror.

A new PA law has effectively nationalized all once-independent civil society groups and NGOs. They now must submit plans and budgets to the PA to review their conformity with the “work plan of the relevant ministry.” Additionally, the law gives the PA power to dissolve any organization and seize or transfer its assets “to a similar Palestinian association or institution.” Aid to “independent” organizations can now be seized by the very PA that the United States is legally prohibited from funding directly.

Meanwhile, a new (nonpartisan) Government Accountability Office audit shows that from 2015 to 2019, the U.S. government could not sufficiently vet aid sub-grantees, as required under U.S. antiterrorism laws. That giant unaccountability loophole has allowed millions in U.S. taxpayer dollars to flow to terror-supporting sub-grantees, laundered through misleadingly benign-sounding NGOs such as the Palestinian Peace Coalition and Pal-Think for Strategic Studies.

Proponents insist that funding “clean” entities won’t “directly benefit” the PA or consequently directly fund terror or “pay-for-slay” payments. From a purely legal standpoint, that is debatable; but from a moral standpoint, it is abhorrent: it facilitates “pay-for-slay” through a shell game where the funding ultimately lands in the same pockets. In this case, “benefiting” vs. “directly benefitting” is a distinction without a moral difference.

However pure our intent, practically, aid we direct to non-terror-connected Palestinians will be intercepted through the thuggish tyranny of a PA still subsiding “pay-for-slay.”

The principle behind the Taylor Force Act is morally compelling and transcends partisan politics. Hiding behind semantics to pretend that U.S. tax dollars will not flow to the sponsors and families of the murderers of Force and so many other Americans is cowardly. Could any honorable administration figure look our families in the eye and tell us otherwise?

The same bipartisan consensus which stood behind this principle before must step forward again: the moral calculus is no different today. The administration must not dishonor itself by doing the unconscionable: laundering U.S. tax dollars to the very terror networks responsible for promoting and rewarding the shedding of innocent blood, particularly that of U.S. citizens.

Stuart Force is a former US Air Force officer and pilot. He and his wife Robbi were instrumental in the passage of the anti-terror financing laws named for their son, Taylor.

Sander Gerber is the CEO of Hudson Bay Capital Management, a distinguished fellow at the Jewish Institute for National Security of America (JINSA), and a fellow at the Jerusalem Center for Public Affairs.